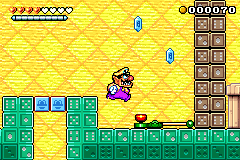 Wario about to use a button to break domino blocks

Domino blocks[1] are blocks appearing in Wario Land 4. They appear only in the level Domino Row, and they can be found blocking the way to certain paths or jewel pieces. Unlike regular blocks, they cannot be destroyed by Wario's moves. Instead, the player must press a button to break the domino blocks apart.

With the exception of the first button, Wario must race a row of dominoes to each button. If the dominoes reach the button first, the corresponding domino blocks cannot be destroyed during that same playthrough of the level.