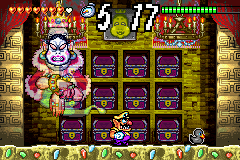 The black egg[1] is an enemy in the Game Boy Advance game Wario Land 4. It appears exclusively in the final battle against the Golden Diva, being the third of the five creatures that she produces in an attempt to harm Wario. It is a black egg with orange spots that hatches into a black-colored duck. The Golden Diva throws these eggs at Wario, which will break and hatch black ducks if they hit the ground. The ducks, when hatched, seem harmless at first. They waddle across the screen innocently and can be defeated by a simple ram or Smash Attack. But within a few seconds of hatching, they will start to flash yellow, greatly speeding up their pace and will detonate if they come in contact with Wario, causing him damage. If Wario is not nearby, the ducks will blow up of their own accord within a short amount of time. In order to counter the Golden Diva's attack, Wario must catch the black eggs when the Golden Diva throws them towards the ground. He can then throw them back upwards, which he must do before it detonates. If the egg, when thrown, comes in contact with the Diva's face, it will hatch and the duck will immediately detonate, inflicting damage on the Golden Diva.