An egg[1][2] is an enemy in the Game Boy Advance game Wario Land 4. It only appears in the battle against the boss Cuckoo Condor in the Ruby Passage. It is produced by the condor form of Cuckoo Condor, which then hatches into a yellow-colored duck. 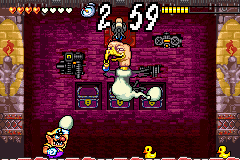 Upon hatching, the duck will move slowly across the bottom of the screen. At this stage, they are very weak and vulnerable, being able to be destroyed by a simple ram or Smash Attack. But after a few seconds of being left alone, they will begin to flash orange and greatly increase their pace. If Wario is to touch them at this stage, he will take damage. After a while, they will blow up of their own accord. Alternatively, Wario can catch the eggs before they hit the ground. He would then be able to throw them at the Cuckoo Condor to deal damage and counter the attack.

The eggs behave in a very similar way to black eggs, which appear in the final battle against the Golden Diva. The black eggs are more aggressive, and they will blow up quicker.