Mewtwo is a Legendary Psychic-type Pokémon debuting in the first Pokémon games, Pokémon Red Version and Pokémon Green Version. Mewtwo was created artificially based on the genetic code of Mew to be the ultimate battling Pokémon, though it grew too vicious and powerful to be controlled and escaped. Among all the Pokémon that exist, Mewtwo has the most violent nature. As of Pokémon X and Pokémon Y, Mewtwo can Mega Evolve into either Mega Mewtwo X or Mega Mewtwo Y.

Artwork of Mewtwo from Pokémon Red Version and Pokémon Green Version can be used as a stamp in Mario Artist: Paint Studio. 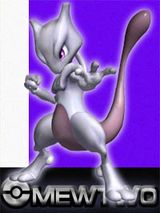 In Super Smash Bros. Melee, Mewtwo is an unlockable character. Mewtwo appears after the player has played a total of twenty hours of Melee matches with one player, ten hours with two players, six hours and forty minutes with three players, and five hours with four players; alternatively, the player can play 700 Melee matches. Mewtwo must then be defeated on Final Destination to be unlocked.

Mewtwo's moves are powerful and it can jump high, but it is a lightweight fighter, making it easier to launch, and it does not move as fast as other characters; while it has a high air speed, Mewtwo has a low fall speed and its running and walking speeds are low. Mewtwo also floats above the ground, making it an easy target to send flying and even KO at low damage percentages, and it also has low traction. Mewtwo also possesses a strong grab, and its throw moves pack a strong punch as well. Its standard special is Shadow Ball, which charges and fires a ball of dark energy. Its side special is Confusion, which flips opponents onto the ground and deflects projectiles (however, the reflected projectile does not damage opponents). Mewtwo's down special is Disable, which dazes any opponents that it is facing when using the move. Finally, its up special is Teleport, which causes Mewtwo to disappear and reappear in a different location.

Mewtwo does not use its hands to hold items, using telekinetic powers instead, making the items hover before it. A similar style is seen when Mewtwo hangs on a cliff or grabs another character. The only time it does touch an item is when using the Parasol. Mewtwo is voiced by Masachika Ichimura in both English and Japanese.

Mewtwo is one of the five characters who did not return in Super Smash Bros. Brawl as a playable character (the other four being Dr. Mario, Young Link, Pichu, and Roy). Data exists on the disc for Mewtwo as a playable character, however, meaning that at one point in development it may have been a character in the game. It does, however, have the appearance of a trophy, which can be obtained by completing All-Star Mode on Intense difficulty. 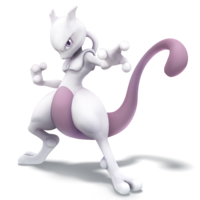 Mewtwo as it appears in Super Smash Bros. for Wii U

While Mewtwo's moveset is identical to that of its Super Smash Bros. Melee incarnation, it has been given a Final Smash: Psystrike, in which it Mega Evolves into Mega Mewtwo Y and delivers a mental attack. Some of its other moves have also been altered to increase their effectiveness. Mewtwo is also much lighter (only being heavier than Jigglypuff), and moves faster than in Super Smash Bros. Melee, while keeping its attack power. Additionally, Mewtwo still offers one of the highest air speed attributes in the game, losing only to Yoshi and Jigglypuff, but its high air speed is offset by very low air acceleration, and its falling speed is above average as well.

When Mewtwo is downloaded, it can appear in all the solo game modes, except for Events. In All-Star mode, Mewtwo appears between Diddy Kong and Pikachu. However, Mewtwo's inclusion has no effect on any of the challenges.

Mewtwo reappears as an unlockable playable character in Super Smash Bros. Ultimate. Mewtwo's mobility is improved, while its double jump is made faster. Mewtwo's aerial attacks have less landing lag, while its short hop timing is reduced; Mewtwo's smash attacks knock opponents back farther, while some moves deal more damage.

Mewtwo also makes an appearance in the World of Light's opening cutscene, where Mewtwo attempts to deflect Galeem's large laser attack by using Confusion along with Zelda, but fails, with both of them getting eliminated by the lasers and turned into dark clones. 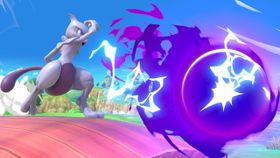 Shadow Ball is a Ghost-type move in the Pokémon series, and Mewtwo's standard special move. When used, Mewtwo stands in place and charges up a ball of dark energy; the charging deals electric damage in Super Smash Bros. Melee. Unlike other auto-charging moves, Mewtwo continues to charge even when the move is fully charged; it can only be stopped by firing, shielding, or tilting the control stick to automatically roll. Charging the move allows it to travel farther and deal greater damage and knockback. When fired, the ball travels forward in a waving motion. The move also has a recoil effect when fired which is greater when fired in the air, pushing Mewtwo back depending on how much the move was charged before firing. 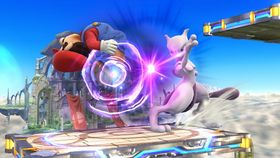 Confusion in Super Smash Bros. for Wii U

Confusion is a Psychic-type move from the Pokémon series used as Mewtwo's side special move. When used, Mewtwo swipes its hand, causing a dark aura to appear around it, tossing opponents to the ground and damaging them if they are close enough. Confusion can also deflect projectiles, though in Super Smash Bros. Melee, deflected projectiles cannot damage the original user, but in Super Smash Bros. for Nintendo 3DS / Wii U, all projectiles deal damage when reflected. When used in the air, Mewtwo does a slight hop. The move can also bypass opponents' shields. 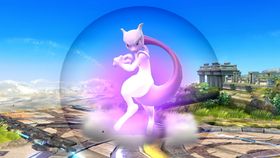 Mewtwo about to use Teleport in Super Smash Bros. for Wii U

Teleport is a recurring Psychic-type move appearing in every installment of the main Pokémon series, and appears as Mewtwo's up special move. Mewtwo disappears in a flash of light, and reappears depending on the direction the player holds on the control stick, similar to Zelda's Farore's Wind. Like any other up special attacks, Mewtwo is left in a helpless state if it is in the air after using Teleport. 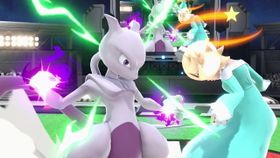 Disable is Mewtwo's down special move, based upon the recurring Normal-type move from the Pokémon series. Mewtwo fires a beam from its eyes in the direction that it is facing, temporarily dazing any nearby opponents caught by it and damaging them; the opponent must be facing Mewtwo and at around its eye level for the move to work, however. The move also dazes opponents for longer if they have a higher damage percentage. In Super Smash Bros. Melee using Disable on an already dazed opponent causes them to fly off, though in Super Smash Bros. for Nintendo 3DS / Wii U this only deals more damage. If the move is used on an opponent in the air, then they will only briefly flinch. 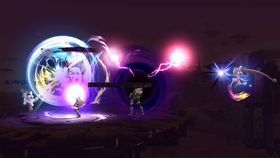 Psystrike in Super Smash Bros. for Wii U

Psystrike is Mewtwo's Final Smash. In the Pokémon series, it is a Psychic-type move learned by Mewtwo at level 100, and is Mewtwo's signature move as of Generation V. When activated, Mewtwo Mega Evolves into Mega Mewtwo Y, then fires a large ball of psychic energy across the screen in the direction Mewtwo is facing, stunning any opponents in its path. The stunned opponents then take heavy damage and are launched away as Mewtwo returns to normal. Opponents can be stunned even if they are in the air.

Mewtwo is one of the Costume Mario costumes that can be unlocked in Super Mario Maker, either with a Mewtwo amiibo or as a random unlock by completing the 100 Mario Challenge. Mewtwo's sprite is based on its overworld sprite from the Nintendo DS Pokémon games, though like the other Pokémon costumes in the game (excluding the Event Course costumes), Mewtwo does not have any unique sound effects, instead using the default Super Mario Bros. sounds.

Mewtwo coverage on other NIWA wikis: