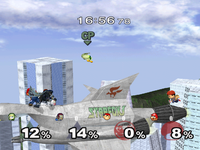 In the Corneria stage, the Great Fox flies above the planet Corneria.

Corneria as it appears in Super Smash Bros. Ultimate

Corneria is one of the smaller stages in Super Smash Bros. Melee. The battlefield is actually Fox McCloud's flagship, the Great Fox, in flight over a large city on Corneria, which is a planet in the Lylat System; all of this is from the Star Fox series.

The Great Fox's front two laser cannons open fire often, and any players caught in its path of destruction may be KO'd. It is possible to destroy these cannons by attacking them repeatedly. Also, Star Fox's team will occasionally show-up in Arwing Fighters and open fire on anyone. By performing a Smash Taunt, Fox or Falco can communicate with them. Sometimes, Fox's rival Wolf O'Donnell and his team show up and shoot the stage as well. However, only one Arwing or Wolfen will be on the screen at any given time.

Not in My Music[edit]

Corneria coverage on other NIWA wikis: