“Failure is not an option!”
—Roy, Super Smash Bros. Ultimate

Roy is a fifteen-year-old swordsman and the main protagonist of Fire Emblem: The Binding Blade, who made his debut as a character in the crossover game, Super Smash Bros. Melee. Roy is the son of Eliwood of the House Pherae, taking over leadership of Pherae's army in place of his ill father during the Disturbance of Bern. 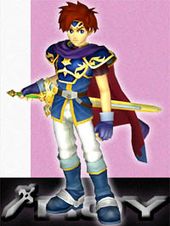 Roy is an unlockable character in Super Smash Bros. Melee, unlocked by beating Classic or Adventure Mode as Marth or by playing 900 Melee matches, then by defeating him on Temple. During development, Nintendo of America and Masahiro Sakurai discussed possibly removing Roy for the Western release of the game, but ultimately decided to keep him in.[1] Roy's moves are similar to Marth's, but are strongest at the hilt of his blade. In general, Marth's sweetspotted attacks are stronger than Roy's, but the sweetspot on Roy's sword is larger. As an aesthetic detail, some of Roy's moves deal fire damage, reflecting the fire powers of his sword in Fire Emblem: The Binding Blade. Roy is voiced by Jun Fukuyama; like Marth, all of his voice clips are kept from the Japanese release, reflecting the Japan-only status of the Fire Emblem series at the time.

Roy's standard special move is Flare Blade, which has Roy charge a sword strike that deals an explosion. His side special move is Double-Edge Dance, which is similar to Dancing Blade. His up special move is Blazer, which sends Roy into the air as he slashes upward, dealing fire damage to opponents. Finally, his down special move is Counter, which deals more damage than Marth's version of the move (1.5x damage) but is slower and does not remain active as long.

Roy's only appearance in Super Smash Bros. Brawl is as a Sticker, depicting his regular appearance in Fire Emblem: The Binding Blade. It increases the power of slashing attacks by 24. 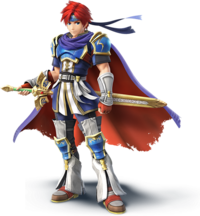 Roy is a downloadable character along with Mewtwo, Lucas, Ryu, Corrin, and Bayonetta in Super Smash Bros. for Nintendo 3DS / Wii U, released the same day as Lucas and Ryu, on June 14, 2015. His appearance in this title is primarily based on his Great Lord design in Fire Emblem: The Binding Blade, while taking elements from his appearance as downloadable content in Fire Emblem Awakening. His voice actor from Super Smash Bros. Melee, Jun Fukuyama, reprises his role for this game, giving Roy new voice clips.

Like in Super Smash Bros. Melee, Roy's attacks are strongest when hitting closer to the hilt of the blade, with yellow sword trails that indicate the sweetspot on his sword similar to Marth. While his special moveset has not changed from his previous appearance, some of Roy's other moves and animations have been altered to further differentiate him from Marth. He also moves faster than he does in Super Smash Bros. Melee, especially while in the air, though he is also heavier than before. In addition, as a result of the redesign, Roy is around the same height as Marth rather than being shorter, though his attacks still do not reach as far. Finally, Roy has been given a Final Smash: Critical Hit, which operates differently from Marth and Lucina's version of the attack and involves him swinging his sword overhead to trap opponents before slashing them.

Roy reappears as an unlockable playable character in Super Smash Bros. Ultimate, retaining his appearance and several of his moves from Super Smash Bros. for Nintendo 3DS and Wii U. Additionally, Chrom is playable, being an Echo Fighter of Roy. Similarly to Marth, Roy's voice is now dubbed in English, being voiced by Ray Chase. Flame effects are now included in more of Roy's attacks, further referencing his sword's fire powers. Roy receives benefits from universal changes, having faster mobility; reduced landing lag in his aerials and short hop timing; a greater recovery, due to the reintroduction of directional air dodges and his increased air speed; and a greater offensive play, due to the abilities to use any grounded attack out of a run and using aerial attacks on ladders, as well as his own attacks dealing more knockback.

On a side note, as with several other returning fighters, Roy's (as well as Marth and Ike's) victory theme has been sped up compared to the previous installments.

In the World of Light, Roy's puppet fighter is found on Galeem's side in the Final Battle area alongside Palutena and Master Hand, and must be awoken to progress the story. 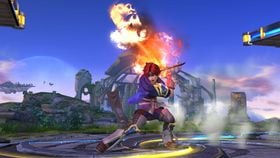 Flare Blade in Super Smash Bros. for Wii U

Flare Blade is Roy's neutral special move. Roy charges up a fiery sword strike, attacking with a slash that explodes. The move charges for as long as the player holds down the special attack button and automatically attacks when fully charged. Fully charged, Roy's Flare Blade is capable of instantly KO-ing any opponent, though Roy also takes recoil damage. 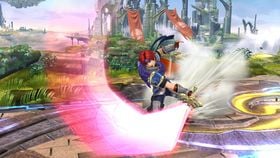 Double-Edge Dance in Super Smash Bros. for Wii U

Double-Edge Dance is Roy's side special move. The move is similar to Marth's Dancing Blade, in that Roy performs a series of four sword slashes, and can change the attack by angling the control stick at certain points. In addition, the third down hit and the final hit for all directions deal fire damage, and the third up hit is a meteor smash rather than the third down hit. 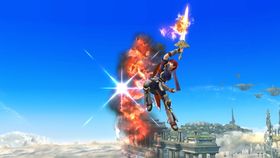 Blazer in Super Smash Bros. for Wii U

Blazer is Roy's up special move. When used, Roy leaps into the air, slashing his sword up with a fire trail. Blazer is a slower attack compared to Marth's Dolphin Slash, but deals multiple hits of fire damage. The angle at which Blazer travels can also be controlled by tilting the control stick. The move can also be reversed on startup to make it stronger. 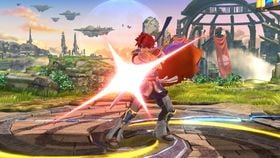 Roy's Counter in Super Smash Bros. for Wii U

Counter is the down special move used by Roy as well as Marth, Ike and Lucina. The move is based on the combat of the Fire Emblem series; when one unit attacks another unit, the opposing unit counterattacks afterwards. When used, Roy enters a readied stance and automatically counterattacks whenever attacked, reflecting all damage and knockback back onto the opponent.

According to Masahiro Sakurai, the counter move was meant to reference the turn-based elements of Roy's home franchise.[2] 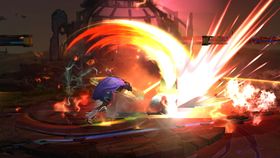 Roy's Critical Hit in Super Smash Bros. for Wii U

Critical Hit is the Final Smash used by Roy as well as Marth and Lucina, based upon the critical hit mechanic of the Fire Emblem series. Roy's Critical Hit functions differently from Marth and Lucina's: he does not charge forward, instead slowly swinging his sword around in an overhead arc starting from behind him, based on his critical hit animation when using the Binding Blade in Fire Emblem: The Binding Blade. Opponents caught in the arc take repeated damage and are brought in front of Roy, where he swings his sword downward, creating a large blast and launching opponents. Like with Marth and Lucina's Critical Hit, cosmetic health bars designed after the ones from Fire Emblem Awakening appear at the end of the move, showing the opponents' health drop rapidly to 0. However, Roy's Critical Hit isn't as strong and doesn't launch as far. Strangely, at the end of the move, a sheath appears on Roy's back and he sheathes his sword, but the sheath disappears once Roy draws his sword back out.

Roy coverage on other NIWA wikis: