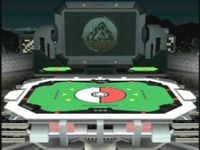 Pokémon Stadium is a Pokémon stage in Super Smash Bros. Melee, Super Smash Bros. Brawl, and Super Smash Bros. Ultimate located in Kanto. It is based off the stadiums used during the final battles of the Pokémon series. It is also based on the stadiums used in the game Pokémon Stadium. It looks like a simple stage, with two floating platforms, but on regular intervals it will change into one of four different terrain types: Water, Fire, Rock, or Grass. The stage also features a giant screen in the background showing a close up of the battle or sometimes the current leader of the match along with fireworks exploding in the sky. Unlike the stage Pokémon Stadium 2, no Pokémon appear in any of the different forms the stage changes into.

The stage is featured in Stage 7 of Adventure Mode, which features the player going up against several Pikachu. After Jigglypuff and Pichu are unlocked, they will randomly appear amongst the Pikachu.

There is also an alternate track that usually plays when Pichu is battled. It is called "Pokémon Gold & Silver", which is a combo of many of the battle themes from the eponymous games.

In Super Smash Bros. Brawl, there is also a similar stage called Pokémon Stadium 2, that is similar to this stage in concept, but alters the transformations. The original is also unlockable.

Songs Not in My Music[edit]