It has been requested that this article be rewritten and expanded to include more information. Reason: include a list of all music 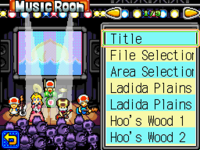 Snapshot of the Music Room for Super Princess Peach. The Peach Hit Five is featured here.

The band is made up of three Toads, Toadsworth and Peach herself, though only Peach and Toadsworth are there at first when the player starts a new game file. The three extra Toads appear when the player collects more musical scores from gameplay stages, or purchases certain ones from Toad's shop. Peach is the lead singer, Toadsworth and the right Toad play guitars, the left Toad plays the bass and the middle Toad is on drums.

This group is the host for the Music Room section of the Super Princess Peach game, where all the musical scores can be found after collecting/purchasing them during gameplay itself. This list also includes a few voice samples from Princess Peach herself.