This article is about the boss from Super Princess Peach. For the giant Magikoopas in general, see Big Magikoopa.

“There's a giant magician up ahead... Wind is his weakness, so attack his head with a cyclone. When he's dizzy, that's your chance! I hate magicians! GRRRRRRRR!”
—Perry, Super Princess Peach 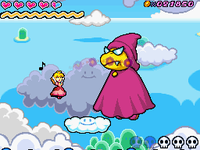 Giant Kamek is a boss in Super Princess Peach. He is fought in World 7, Giddy Sky. After the Mario Bros. and several Toads are kidnapped by the Army Hammer Bro, he holds captured Luigi. When Princess Peach and Perry arrive at a section of Giddy Sky, where Luigi is held, they find him trapped in a bubble with Giant Kamek watching over him. When Peach attempts to approach her friend, he then casts a magical spell that sends Luigi flying and envelopes himself in magical rings that make him grow giant.

During the battle, Giant Kamek levitates in the air, periodically teleporting from place to place. This teleporting can be tracked via his wand, which moves around to stay by his side. Giant Kamek frequently fires a magic blast typical of Kameks from his scepter. These either come in bursts of three or five or occasionally three shots in succession that home on Princess Peach. Giant Kamek will also summon Kameks on brooms to ram her, some of which carry crystals which drop to the ground on defeat. A cloud rotates in the center of the battleground, which is the easiest way to get to Giant Kamek and hit him with Joy's cyclone. Giant Kamek's face is the only solid part of his body, Peach will pass harmlessly through his robe, so the cyclone needs to hit his face.

When hit, Giant Kamek's head will spin 360 degrees multiple times before stopping, leaving him dizzy and vulnerable to any method of attack. When Giant Kamek's HP is reduced to 2 points, he starts using Gloom, his robes and clothing turning blue and him starting to cry. The cloud is destroyed and Peach must now use Joy to fly up to Giant Kamek as well as stun him. His magic comes faster and he also teleports more frequently.

Unlike the other bosses, who explode upon being defeated, Giant Kamek turns transparent and disappears. Luigi then falls from the sky, his bubble popping, and has a happy reunion with Princess Peach, though she apparently does not remember his name, as the game's text states "You saved the green man?"

Giant Kamek must be battled again post-game to unlock the three extra stages in Bowser's Villa.