“Bone Dragon hates a pounding headache as much as egg on his face.”
—Message Block in Bone Dragon Pit, Yoshi's Story

Bone Dragons are large, hydra-like dragon skeletons that Yoshis encounter underground in the game Yoshi's Story. Bone Dragons usually block Yoshi's way, and to get past them, Yoshi has to either throw Yoshi Eggs at its head, or Ground Pound it, with either method taking two hits to defeat the Bone Dragon. Bone Dragons aren't completely defenseless, however, as they can attack the Yoshis by occasionally spitting a fireball at them.

In a couple of cases, Yoshi encounters a three-headed Bone Dragon, complete with a body. Each of the heads take two hits and Yoshi receives three melons when it is defeated. Touching the body will not hurt Yoshi.

Super Smash Bros. Brawl has a Sticker of a Bone Dragon that raises the strength of attacks that involve biting by thirteen. It can only be used by Yoshi, Wario, Pokémon Trainer, and Wolf. 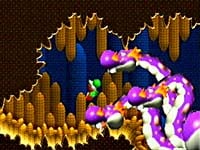