SNES test cartridges exist which, among other things, include leftover graphics from an early build of Super Mario World. These cartridges reveal that, at one point, Goombas would have been stompable like their older counterparts, and Venus Fire Traps would have made a return from Super Mario Bros. 3. The Super Leaf power-up and Raccoon Mario form were both present, but appear to have been replaced by the similarly-starring Caped Mario in the final game. Lastly, other block types such as Brick Blocks and dungeon tiles would have been directly updated from the previous game.

Some of the unused sprites in the SNES Test Program. Notice the Super Leaf, a Super Mario Bros. 3 lookalike Fire Flower, lower-quality versions of both the Banzai Bill and the Big Boo, and the raccoon tail on the top row of Marios.

In an interview, the developers of Super Mario World revealed two pictures depicting early sprite tiles for the game. It is also worth noting that Nipper Plants, Chain Chomps, Sledge Brothers, and Hammer Brothers are present on the sheet, the last of which is inconsistently shown with or without shoes between frames, showing that these sprites were not considered complete even before scrapping. Alongside this, green and yellow blob-like creatures were also shown. It is likely that the blobs would have been early versions of Baby Yoshis. Additionally, a full-grown Yoshi is shown with a head similar to the final version's Baby Yoshis, and that Mario was originally going to punch Yoshi's head in order for him to either extend his tongue or breathe fire. A Super Mario Bros. 3-styled Lift is also shown among the early sprites. Other sprites included a black ball-shaped creature with white eyes and two stick-like feet, a red Power Balloon, a more on-model Cheep Cheep, and circular and square variations of the Triangular Block.[2]

Later, in late July of 2020, the source code for many prototypes of Super Nintendo games were dumped online, and includes many concepts and sprites showing various entities in different stages of creation, some of which go entirely unused.

Among the data on the Super Mario World ROM, there are many levels that did not make it into the released game. The majority of these are not referenced by the game's level pointer table, which means that a standard copy of Super Mario World will not be able to play them, even though their data is present. It also means that most of them do not have names, and those are listed here by their address in the ROM.

There is an unused Switch Palace to the left of Valley of Bowser 3. Since it leads to an "empty" level, it is probable that it was scrapped early in development. Beating the Secret Exit of Valley of Bowser 3 would cause Mario to walk to this switch palace, except that Valley of Bowser 3 has no secret exit, and there is no path for Mario to walk on. This glitches the game, causing the player to be teleported to level 00 and get trapped in an endless bonus game. If the player finds a way onto the Switch, the level can be entered; it is nearly identical to the well-known TEST level, although it has a garbled background.

Probably the most famous of the unused levels, this is also one of the few referenced in the pointer table. Actually, around half of the references are directed to this level. Due to this, this was one of the first unused levels discovered. The actual level is a short plain with TEST spelled out in turn blocks in the sky. At the end is an arrow pointing into a small hole, and Mario will die if he goes down this hole. Mario will also receive a 1-up if he either walks to the end of the level, or slides down the side of the first T, but he cannot receive both. In the copy that was originally discovered, Yoshi could not enter the level; however, this is specific to that copy - it is not a property of the level as a whole. This level is also most likely a placeholder as once one looks at the ROM they will see there are over 60 copies of the level with no changes.

This is actually the (used) level Donut Plains 1. However, it appears 3 times in the level pointer table. Once at level number 0x15, the copy used in-game, once at 0x16, a duplicate, and once at 0x17. It is this last one that is most likely to be a remnant of early game builds, as it is paired with a garbled background, and has the name #2 MORTON'S PLAINS. (The garbled background is the same one used in Yoshi's Island 1; switching to its tileset with a level editor fixes the background glitch, but a glitchy palette still remains.) This name is also attached to one of the copies of Level 0x30200.

This is a test for a special kind of slope that fixes a bug in the code. It is referenced in the pointer table as Level 0x108. Like 0x17, it has a garbled background, but switching to a certain unused tileset (see #Unused level components below) will fix the background.

This is a short level set in the sky. It contains a sprite not found anywhere else in the entire game, which behaves like the platforms from Forest Secret Area, but with no vertical movement. Due to a glitch in the way the level was originally coded, it is rendered unplayable, but fixing this is straightforward. Due to the nature of the glitch involved, it seems this was a very early level design. This, coupled with the fact that it appears before any other level in the ROM save the "TEST" level, suggests that it was the first level created for Super Mario World.

This level contains the mushroom scales from Butter Bridge 1. However, they are not functioning correctly. It also contains Super Mario Bros. 3 style Piranha Plants. However, they have slightly glitched graphics, which causes them to have an upside-down flopping Cheep Cheep with an incorrect palette instead of a stem.

A long hall with doors leading to each of the game's bosses. They are out of order from their appearance in the game, and that Reznor is not differentiated from the Koopalings. Big Boo is absent.

A short and quite glitchy underground level. It makes use of a falling layer 2 effect, which is familiar from the end of Chocolate Secret.

A small room with two stone cubes, two Hotheads, and two Lil Sparkies. Possibly a level to test the Hothead and Lil Sparky enemy data. Despite being a castle-themed level, its background is completely black, like the first room of #4 Ludwig's Castle.

An early version of #6 Wendy's Castle. It differs little from the final version.

An area with one pipe and a long stretch of ground. Due to the music, it is likely that it was supposed to become an underwater stage. Note that the pipe is a brownish-gray color.

It is similar to the exit of a Ghost House, but never used in-game.

A totally empty level. This is most likely used to have a blank background on levels with layer 2 activated.

Another unused Ghost House exit. This one has some clouds, but the Giant Gate tape is erroneously placed too far from the base.

A level in which 3 bushes float in a black void.

A castle-themed level in which an enterable pipe lies adjacent to a large hole. For unknown reasons, this level is 5.5 times longer than the accessible portion.

In some cases, some objects were left in the game's code that were never used in a level.

In addition to the above, it appears that the game was intended to have translucency effects in use on some levels. These can be seen in some early screenshots, and are perfectly safe to use (aside from the fact that all Message Blocks will appear blank due to their text sharing some settings) when accessed by hacking the final game with Super Mario World hacking tools such as Lunar Magic. Otherwise, they are never used. 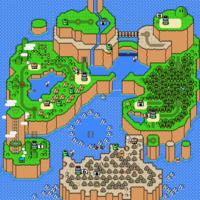 On the Map Screen, there were four sprites that were never used in the final game. All of them are accessible via certain hacking programs.

Using the Super Mario World ROM and a hex editor, players may access debug functions that were left in the game.[3] These include: