Donut Ghost House is one of two Ghost Houses in the Donut Plains and the first one visited in Super Mario World. As such, it serves as an introduction to Boos. 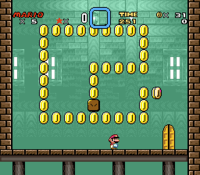 The above-mentioned regular exit, when used, makes a bridge appear that crosses the river in the East, allowing Mario or Luigi to go to Donut Plains 3.

In the first room, above the Boos, there is a platform that can only be reached by flying up through an opening to its left as Caped Mario (or Caped Luigi), where another Boo Crew is found. Running across it, the player eventually reaches an area with four Rotating Blocks and a door. The blocks contain transparent 1-Up Mushroom, and the door leads to a Giant Gate, which itself provides access to the Top Secret Area.