“Mario has defeated Larry Koopa in castle #7. All that is left is Bowser's Castle where Princess Toadstool is being held. Can Mario rescue her and restore peace to Dinosaur Land?”
—In-game text, Super Mario World

#7 Larry's Castle is a level in Super Mario World, as well as the last Koopaling castle in the game. It can be accessed through either the completion of the level Valley of Bowser 4, or through the secret exit of Valley Ghost House.

This level starts with a moving snake platform (which Mario must follow) that goes all throughout the first room. In the first room, the player will encounter Ball 'N' Chains and spikes. When the raft reaches the top of the level with a door on the right, the player may choose to take the door, or to stay on the raft. If the player stays on the raft, he will see a midpoint section, two Dragon Coins and a Super Mushroom. The door on the right of that section will lead to the same room as the door above. In the second room, the player will see Dry Bones, Magikoopas and a few Lava Bubbles. The yellow blocks are walls, and the player either needs to swing them with a Cape Feather, or allow the Magikoopa to break them. If the Magikoopa breaks a yellow block, it will turn into a Yellow Koopa Troopa, a Thwimp, or a 1-Up Mushroom. Before the final red door, there is a Green ! Block, which gives the player a Cape Feather.

Notably, the first part of this level can be heavily exploited in order to skip most of the difficult parts of the level. At the beginning of the level, when the snake platform moves horizontally after making stairs, if the player goes to the snake's head, runs to the left then jumps when below the above platform, it is possible to land on this solid platform and skip close to half of this part of the level. Furthermore, standing on some of the upper independent Ball 'N' Chains' blocks during the snake platform's first round of the level allows the player to remain on these blocks without taking damage and jump back on board during its second round of the level. 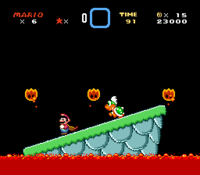 The player fights Larry Koopa at the end; his fighting method is similar to that of Iggy Koopa in #1 Iggy's Castle, except there are also three Lava Bubbles present as well (one at each side, and one in the center). When this level is cleared, the player will gain access to Bowser's Front Door. In the cutscene depicting the castle's destruction, Mario lifts the castle up and kicks it away before it breaks apart offscreen, with Mario then posing.

A 1989 build of the fight. Larry's hairstyle is also slightly different.
Retrieved from "https://www.mariowiki.com/index.php?title=7_Larry%27s_Castle&oldid=3740998"
Categories: