“Mario found his way through the Forest of Illusion and has put an end to Roy Koopa of castle #5. Onward to the dangerous (but tasty) Chocolate Island!”
—In-game text, Super Mario World

#5 Roy's Castle is the fifth castle in Super Mario World. It is found at the end of the Forest of Illusion, and can be accessed through the secret exit of Forest of Illusion 3. The castle includes a snake platform that Mario and Luigi have to stay on and follow to avoid the lava below. Roy Koopa is fought here.

After the snake platform segment of the castle is finished, Mario must jump onto a platform at the top of the screen and traverse across another tight space of three short platforms, this time with spikes at the top. There is a Switch Block in the middle of the space, which Mario can activate to obtain a 1-Up Mushroom in a cage of blocks at the top of the screen; however, doing this also frees an additional Bowser Statue from the cage. Next, Mario must traverse across a long mechanical bridge spanning across a pool of lava, while avoiding three Lava Bubbles and Bowser Statues shooting flames at him. After crossing the bridge, Mario finds three Stretch Blocks suspended above a wide bottomless pit. Above the first Stretch Block, there is a green ! Block that can be activated in the Green Switch Palace and contains a power-up. Mario must jump across the Stretch Blocks to cross the bottomless pit, while avoiding more bouncing Lava Bubbles and a single Bowser Statue between two blocks. The final Dragon Coin can be found above the second Stretch Block. After crossing the bottomless pit and avoiding one last Bowser Statue, Mario can finally open the door to the boss battle with Roy Koopa. 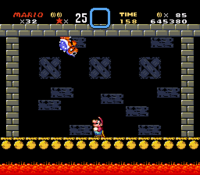 At the end of that room, the brothers make it to the boss, Roy Koopa, whose fighting method is similar to that of Morton's in the second castle, but the walls close in slightly as time goes on. After he is defeated, the two are able to rescue the Yoshi Egg that was trapped inside it. Like the other castles in Super Mario World, it was destroyed shortly after. The cutscene has Mario prepare to detonate Roy's castle, only for the explosion to not occur, causing Mario to cautiously approach the castle before it humorously proceeds to blow up just as Mario investigates, leaving him covered in soot and tattered as well as a poof of steam emerge from his head. By completing this castle, the player gains access to Chocolate Island 1.

A reference to Roy's battle in this game is made in New Super Mario Bros. 2, in the manner that the walls close in every time Roy is stomped on.