“Ludwig von Koopa's days of composing Koopa symphonies in castle #4 are over. The Forest of Illusion lies ahead. Mario must use his brain to solve the puzzle of this perplexing forest.”
—In-game text, Super Mario World

#4 Ludwig's Castle is the final level in the Twin Bridges area of Super Mario World. It can be accessed by completing Cookie Mountain or Butter Bridge 2. By completing this level, the player gains access to Forest of Illusion 1. It consists of a maze-like narrow corridor, a large room with a descending spiked ceiling, and a tall chamber containing many fences with Climbing Koopas, and a boss fight with Ludwig von Koopa at the very top of the castle. 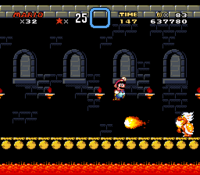 The first room has several Bony Beetles and Ball 'N' Chains. Mario must carefully avoid those to get to the next door. There is a mushroom just after the door. Also, there is a secret path that Mario can take. The square block just in front of the door can be jumped through, and the player must jump up a series of ledges to reach a warp pipe, which leads to a 1-Up bonus game. In the next room, he has to deal with a spiked roof that slowly descends to the floor. Mario must hit the ON/OFF switch from ON to OFF in the middle of the room to make it go back up, and run towards the door on the left while avoiding the Lava Bubbles to avoid getting crushed, which the spiked roof will eventually descend again after it reaches all the way to the top. In the third room, there are fences with many Climbing Koopas, as well as more spikes. Behind the red boss door is Ludwig von Koopa, whom Mario can either defeat with fireballs or three stomps on the head.

After Mario defeats Ludwig, he retrieves the imprisoned Yoshi (which is trapped in an egg), and attempts to blow up the castle. However, the detonation causes the castle to rocket into the air, and it crashes into the nearby hill. The hill gets a bandage after that.

After Mario reaches Ludwig's room, Ludwig will spit out up to four fireballs. Jumping on him will make him spin across the floor in his shell. After he stops, Ludwig will leap towards Mario. Jumping on him two more times will send him flying into the air where he explodes. A cutscene shows Mario blowing up the castle, which flies like a rocket and hits a nearby hill.