Butter Bridge 2, which makes up part of the Twin Bridges area, is the second level of the Butter Bridge in Super Mario World. It can be accessed through completing Butter Bridge 1. By completing this level, the player gains access to #4 Ludwig's Castle. 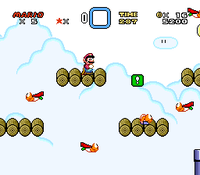 The player has 300 seconds on the Timer. In this level, there are many Super Koopas and some Koopas without Shells.

Most of the level, including the start, takes place on a very long bridge. As Mario walks across it, Super Koopas fly at him. Then, after jumping over a couple of gaps, he finds a Koopa Shell and a ? Block. He can throw the shell up at it to get the item, or jump on the heads of the enemies. Then, he travels across a part of the bridge with many gaps differently-spaced apart, while Super Koopas fly at him again. There is a Dragon Coin here.

Then, Mario travels along a long bridge without any gaps, but the shell-less Koopas kick their shells at him from higher bridges. After three of these, two will do this at once, and Mario has to jump on the Super Koopas' heads to get up to them. There is another Dragon Coin there. Next, after a simple, normal bridge, he gets to the Midway Gate. After this, there are a few bridges at different heights, and a Green ! Block, as well as a blue Warp Pipe. The next part is the same, along with the pipe, but four Super Koopas fly at Mario at the end. There is a ? Block on the floor here, which contains Yoshi.

Placed high at the start of the level is a cloud platform that can be accessed only if Mario is Caped Mario and runs on the first bridge and then makes a jump. This platform contains several coins and a Dragon Coin.

Map of the level.