Yoshi's Island 3 is the third level of Yoshi's Island in Super Mario World. It takes place on a high mountain and features numerous yellow ! Blocks that can make a hidden area easier to find if the Yellow Switch is pressed. Clearing this stage grants access to Yoshi's Island 4. 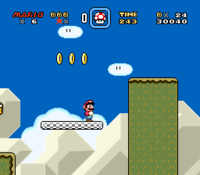 The level starts with a Message Block giving information on Dragon Coins. Right next to the block, a row of yellow ! Blocks can be found. When the player follows the path up the steps and to the right, they come across a brown Single Swing Lift. When going on, the player finds two Stretch Blocks. The first Dragon Coin can be found above. After another brown Single Swing Lift, the player finds a red Koopa Paratroopa flying over two Prize Blocks, the second one containing Yoshi. Soon there is another type of platform. These platforms are black and white and simply move either horizontally or vertically, with another red Koopa Paratroopa flying near them. After a red-shelled Koopa Troopa, there are some more brown Single Swing Lifts. There is a hidden Warp Pipe below the first one. The pipe leads to a simple underground room where the second Dragon Coin is found. Leaving the room through the Warp Pipe takes the player near the Midway Gate.

After a green Koopa Paratroopa, there is the third Dragon Coin and another Message Block talking about how to perform high jumps. Next, there is a row of five Rotating Blocks with a Koopa Troopa on the top. After a moving black-and-white platform and brown Single Swing Lift, the player comes across an area with five Stretch Blocks, where the fourth Dragon Coin is found. Between more platforms, the first Bonus Block in the game can be found, providing the player with a 1-Up Mushroom if the player has collected 30 coins in this level. Otherwise, it yields only a single coin. Soon after crossing two more brown Single Swing Lifts, the player reaches the fifth Dragon Coin. A bit farther, there is the Giant Gate, with no enemies protecting it.