“Wendy O. Koopa in castle #6 has sung her last song. Mario must meet the challenge that is now before him. There is a sunken ship that appears to be a gateway to the Valley of Bowser.”
—In-game text, Super Mario World

#6 Wendy's Castle is a level in World 6 of Super Mario World. Introducing Skewers and Hotheads to the Mario franchise, this level can be accessed through the completion of either Chocolate Island 5 or the Chocolate Secret.

The player will first encounter a Dry Bones that throws bones at Mario, and a Skewer that comes crushing down at full speed. There are two Jumping Boards for the player to get on the next block. After the block are Grinders, with one little space provided for the player to avoid them. Lava Bubbles jump up and down in the next segment, and after that is a combination of Grinders and the Skewers. If the player manages to safely make it out of that part, there are small rock blocks and Grinders along the trail. There is a yellow ! Block, and shorter Skewers that come up and down even faster, so that the ground keeps shaking. Right after is a midpoint and the door to the next section.

The next section involves moving blocks, Lil Sparkies and Hotheads. The player must be careful in the middle section of the second part in order to avoid getting crushed. At the end of the second part is a green ! Block, and behind it the boss door that leads to the battle against Wendy O. Koopa. 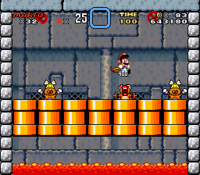 The fight against Wendy O. Koopa is similar to Lemmy's fight in the third castle, except the pipes are flatly leveled, and that there are two diagonal Lava Bubbles rather than just one. When Wendy is defeated, Mario wipes away the castle with a mop and rescues an egg. Mario then moves on to the Sunken Ghost Ship.