Yoshi's Island 4 is the fourth level on Yoshi's Island in Super Mario World. It takes place on a lake and features a lot of platforms floating in the water as well as giant mushroom platforms. The water underneath carries the player backwards if fallen into. 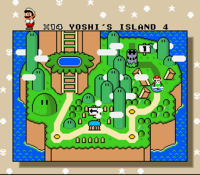 This level consists of a main area, an optional area, and a short screen with the Giant Gate. The Player is allowed 300 seconds on the Timer to complete. This level contains five Dragon Coins, and introduces Cheep Cheeps and Pokeys.

The player starts on a mushroom platform with three Cheep Cheeps circling underneath, and, if the player has completed the Yellow Switch Palace, a yellow ! Block containing a Super Mushroom is also there. If the player can jump onto the mushroom platform directly above the starting point off-screen and then run across the platform from left to right, they can reveal a hidden 1-Up Mushroom. Also early in the level is a ? Block containing a Fire Flower. Continuing on, the player can notice small, floating platforms in the water that serve as the ground for most of the level. However, standing on these platforms too long cause them to sink into the water, so the player must keep moving. Eventually, Floating Mines roll down the current, which must be avoided. Near the middle of the level, a Warp Pipe takes the player to a waterless area where several Pokeys and a Message Block reside. The Message Block tells the player how to leave a level already cleared easily.

After leaving this area, there is a Switch Block on a Rotating Block, and a Super Star in another Rotating Block. Pressing the Switch Block makes the line of coins to the right transform into Empty Blocks, and red Koopa Troopas fall from higher up Empty Blocks. The rest of the level consists of avoiding Floating Mines and Cheep Cheeps. At the end, the player can use the Message Block near the Giant Gate to gain extra points; this Message Block tells the player all about bonus points.