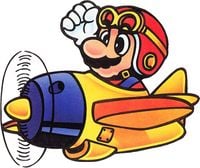 The Sky Pop[1] is a yellow airplane that first appeared in Super Mario Land and again in Mario & Wario. 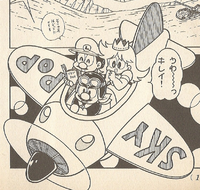 The Sky Pop as it appears in the first volume of the Kodansha-published Mario manga.

The Sky Pop is used only in World 4-3 of the Chai Kingdom. It can fire missiles with unlimited ammunition. Mario uses it primarily to defeat Chickens, Biokinton, Roketons, and Tatanga. After defeating Tatanga, Mario flies off with Princess Daisy in a separate flying machine that is jet-powered and has two seats. In Japanese-exclusive media, however, this jet has been mistakenly known as the Sky Pop II. 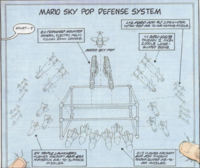 The Sky Pop plays a major role in the issue "Team Play" of the Game Boy limited comic book series. After Greg Campbell informs Mario of Pionpi's Pacific island fortress, Mario takes off from the USS Nimitz. As he closes by the fortress, the Sky Pop is ambushed by flying enemies and Mario notices the island's defenses are using real-world ammunition.

Heavily damaged, Mario takes the Sky Pop back to the carrier and makes a crash landing. The plane is caught in-extremis by Greg and Mario requests to be given access to the carrier's weapons. Greg is initially reluctant, but reasons that Tatanga's forces have invaded U.S territory by taking over the island, and draws up with Mario the "Sky Pop Defense System", a frame around the plane able to outfit a pair of Vulcan cannons, Sidewinder, Phoenix and Marverick missiles, and GBU-10E/B Paveway II laser-guided bombs. The Sky Pop takes off again (confusing two command tower operators) and Mario assaults the island fortress forces, now easily destroying them with his new weapons. Mario lands on the island and confronts Pionpi, but he soon takes off in the Sky Pop again when he learns a friendly F/A-18 Hornet from the carrier's detachment has been heavily damaged and is on course to crash with the Nimitz. From the Sky Pop, Mario grab's the left wing and manages to right the plane up, ensuring a safe landing.

The Sky Pop reappears briefly in the series final issue, Pipes is Pipes. When Michael Hallis summons Mario from the Game Boy, Mario immediately appears piloting the Sky Pop ready and uses it to fly to Clam Creek's nuclear reactor. Later, Michael's mother picks up the plane offscreen and puts it in her personal locker. After retrieving Mario from an inspector at the facility, Mario wakes up and attempts to take off the Sky Pop to rescue Michael, but he is too weakened by his radiation exposure to fly it. Michael's mother insteads put Mario in her bag and drives home.

Sky Pop with Yoshi, and at rest

After clearing Level 10, the Sky Pop is used to intercept Wario and drop one of his enchanted Barrels on his head as punishment for all of the mischief he caused to the heroes.

The Sky Pop is shown to have a conventional-type landing gear configuration but uses a monopod instead of a tail-wheel.

The Sky Pop makes a brief appearance in the beginning of first volume of the Super Mario World arc of a Mario manga published by Kodansha. Here, Mario, Luigi, and Princess Peach use it to land on an island for their vacation.

A Costume Mario costume based on the original sprite of Super Mario piloting the Sky Pop appears in Super Mario Maker. The costume was officially released on January 6, 2016, and can be unlocked by completing the "Southwest Air Adventure" Event Course. All of the costume's sound effects and fanfares (transformation, jumping, clearing a course, losing a life) are taken from Super Mario Land. Pressing up on the

causes Mario's legs to appear from under the plane and face the screen, playing the sound for collecting a coin from Super Mario Land.