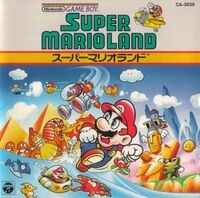 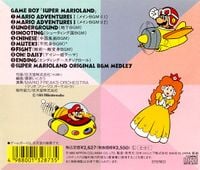 Back cover of the soundtrack

Super Mario Land is an album containing an arrangement of the original soundtrack for Super Mario Land, composed by Hirokazu Tanaka. It was released on September 1, 1989 as both a Cassette and CD, and was published by Nippon Columbia. The album contains arrangements of Tanaka's compositions written by Ikuro Fugiwara and performed by the Mario Freaks Orchestra. Nearly all the game's compositions are arranged across nine tracks, while a tenth is a medley with the original 8-bit versions of the music. The total running time is 34:54 minutes.