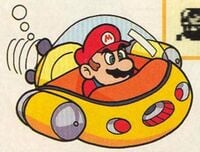 Mario inside the Marine Pop

The Marine Pop[1] is a submarine used only in World 2-3 in Super Mario Land. In this machine, Mario can travel through the water while shooting torpedoes to defeat enemies. The machine can also be used to take out the boss of the level, Dragonzamasu. The player can either shoot at him until he is vanquished, or just go under him to flip the switch past him. Tamao is the only known sea creature who cannot be destroyed by the Marine Pop's torpedoes. The Marine Pop can also grow with Mario if he grabs Super Mushrooms, and turn invincible with Stars. Even though it can power up with those, Superball Flowers do not affect it.