Nintendo Sound Selection Vol.2: Loud Music is a compilation album exclusive to Club Nintendo members. Like the Healing Music CD, the Loud Music CD could only be obtained by redeeming 400 points. The focus of this CD is on louder and heavier music.

NOTE: Tracks 22 and 23 are performances by Nintendo music staff. 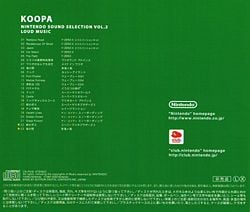 Back cover including the track listing.

The front cover and the CD.