The game was successful, selling over 5,460,000 copies worldwide, with at least 3,290,000 copies in the United States.[citation needed] The classic game Mario Bros. has been included in the game (like the other Super Mario Advance games), with multiplayer. Super Mario World: Super Mario Advance 2 was rereleased on the Wii U's Virtual Console in Japan on April 3, 2014; in North America on December 25, 2014; and in Europe and Australia in March 2016. 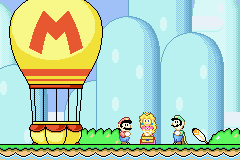 Mario and Luigi arrive at Dinosaur Land with Peach.

The gameplay and plot are the same as in the original version of Super Mario World for the Super Nintendo Entertainment System. Players take control of either Mario or Luigi, adventuring through Dinosaur Land to foil the evil King Bowser and his Koopalings, who have kidnapped Princess Toadstool (also known as Princess Peach) and imprisoned seven of the native Yoshis in eggs. Players navigate through the game's worlds via an overworld map featuring paths connecting to action panels, fortresses, etc. The playfields of the levels are populated with obstacles and enemies, with the player traversing the stage by making use of basic techniques from the NES Mario titles, like running, jumping, swimming, dodging, and defeating enemies; and those new to the original Super Mario World, like the Spin Jump.

The same power-ups from the original release are retained, including the basic power-ups of the Super Mushroom, Fire Flower, and Starman; and the Cape Feather, introduced in the original game. The Super Mushroom increases Mario or Luigi's size; the Fire Flower gives him a fireball attack; the Starman makes him invincible; and the Cape Feather allows him to fly and to attack enemies by spinning. Also returning is Yoshi, the Mario brothers' sidekick and riding mount from the original Super Mario World, who is able to eat most enemies and gain special abilities from holding colored Koopa shells in his mouth. The game also contains blue, yellow, and red Yoshis, which become available to Mario and Luigi from any level in the game after he has found their eggs in Star World and fed them enough enemies or objects to grow them to maturity. When holding any Koopa shell in his mouth, these Yoshis gain the ability that corresponds to its own color, in addition to that of the shell.

Outside of the main mode of play, players may also play a remake of the Mario Bros. game, included in all the other games in the Super Mario Advance series, which supports anywhere from one to four players.

The Wii U allows controls to be customized

Changes from the original game[edit]

Mario's and Luigi's height differences in their respective jumps

The most noticeable gameplay alteration is the removal of the original two-player feature, making the game for only one player. Because of this, Luigi is reworked as an optional character, who can be swapped out with Mario by pressing

on the world maps. As in the special compilation cartridge Super Mario All-Stars + Super Mario World, Luigi has his own sprite set independent of Mario's; however, this one is based on the appearance of his sprite in the first Super Mario Advance. In addition, he plays differently from Mario in several ways. Luigi jumps higher, but more slowly than Mario, and scuttles in midair as he jumps, but he suffers from worse traction and lower running speed than his brother. When Luigi flies using the Cape, he flies slightly higher than Mario, but not as fast; and Fire Luigi's fireballs bounce higher than Fire Mario's. When Luigi is riding him, Yoshi does not instantly swallow enemies; instead, he can spit them out and use them to attack other enemies, automatically swallowing them after a brief amount of time. Finally, if Luigi hits a Coin Block, all of the coins inside it will spill out of the block at once instead of collecting them one by one.

The Fall event, previously made available after the player cleared the Special Zone, is now locked until the player has cleared all 96 exits, and not only Koopa Troopas, Bullet Bills, and Piranha Plants, but also Goombas and Pokeys have their appearances changed. Dragon Coins are added to levels that did not originally have them (such as Ghost Houses and Fortresses), and if the player manages to collect all 480 coins in a single file, they have their appearance changed to bear the image of Princess Peach. A status menu is added, accessible by pressing

on the world maps, which allows players to check their total play time, score, how many levels they have played (and which brother they used in which levels), and whether or not they have collected all the Dragon Coins in a given level; once all the levels have been cleared, the player can press

to automatically access the levels that they select. After the colored Yoshis have been unlocked in Star World, eggs contained in Prize Blocks will spawn different colored Yoshis depending on which power-up Mario or Luigi currently has. The save system is updated to allow players to save at any time, whether on the playfield or in the world maps, and to even save the player's life count and power-ups. The maximum life count is raised to 999, and the maximum number of extra lives the player can get from jumping on or hitting enemies is raised from three to five; additionally, by earning at least 10 consecutive lives, a flower and text stating how many lives the player earned scrolls across the screen.

Other gameplay changes in this edition include players reverting only to super form and keeping their reserve items upon being hit when in caped or fire form; the eggs that Yoshi produces upon eating ten consecutive berries containing different items for different colors of Yoshis; raising the point values for climbing Koopas and the enemy Chargin' Chuck, while decreasing the point value for kicking a Grab Block into another or an enemy; as the GBA lacks the

buttons, Fire Mario can no longer shoot fireballs while holding Shells or Grab Blocks; removing the special button combination for reentering completed castle and fortresses, so that these areas are not accessible until after the final battle has been won; raising the time limit for Bowser's Castle from 400 to 800 (or 600 if the castle is entered through the Back Door); displaying the timer in the Top Secret Area and during the fight with Bowser; featuring the full HUD during the final boss battle instead of just the reserve item; saving the player's best scores for the levels in the Special Zone after that is cleared; and in a bonus game, when Mario/Luigi wins or loses, he performs a V sign or looks down with sadness, respectively. After Mario/Luigi wins in a bonus game, rather than the icons flashing, it shows lines, which makes it easier to see how the bonus was achieved. Defeating enemies while sliding down slopes contains a point chain. Also, Mario/Luigi is capable of climbing beanstalks faster.

In this version, the color of the Yoshi that hatches from eggs found in Prize Blocks depends on two things: whether a Yoshi of a particular color has been found in Star World and fed enough enemies or objects to grow to maturity, and which power-up Mario or Luigi currently has. The possible outcomes are as follows (forms written in italics will always spawn that particular Yoshi, assuming it has already been found and fed in Star World, whereas forms not written in italics will randomly spawn a Yoshi among those which have already been unlocked):

Also, Yoshi will lay an egg containing an item after eating ten red berries. The SNES version always produced a Super Mushroom, though in this version, the item depends on the Yoshi's color: 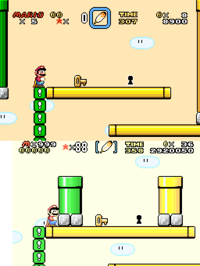 An example of the redesigned levels: In Donut Plains 1, this pair of pipes is added, likely to prevent Mario or Luigi from abruptly grabbing the key and entering the keyhole.

Several levels and areas are either altered to accomodate for the Game Boy Advance's lack of vertical screen space, are redesigned entirely, or both. Notable changes include:

Some colors, text, and animations are altered as follows:

A pre-title introductory cinema scene is added, where Mario, Luigi, and the princess arrive in Dinosaur Land by hot-air balloon, the brothers fly around Yoshi's Island with capes, and upon their return to the landing spot they find the princess missing and become puzzled; if the player has won the final battle, the ending of the cutscene instead shows the princess being escorted by a Yoshi while Mario and Luigi fly behind. Two other cinematics are added, for when the player has collected all the Dragon Coins and when all the levels have been cleared. Luigi is added to the intro scene where it is stated that the player is in Dinosaur Land and Bowser has kidnapped the princess; he is shown pacing back and forth while Mario is looking up. Magikoopa is added to the "cast list" of enemies after the credits.

Following clearing a castle stage, the text is changed as follows:

The ending is also altered significantly, as follows:

The soundtrack has been changed as follows:

As shown in published screenshots, an early build retained the original game's HUD, which was altered in the final to fit in better with the GBA's screen resolution.[4] Even the original test levels were left in the game; they can be accessed via a glitch.

The game was produced by Mario creator Shigeru Miyamoto, and directed by Hiroyuki Kimura with supervision from original SNES directors Takashi Tezuka and Toshihiko Nakago. The new graphics were designed by Emi Tomita, and the new audio cues were composed by Yasushi Ida and Taiju Suzuki. This was the last entry in the Mario franchise to be produced under Hiroshi Yamauchi's administration as president of Nintendo.