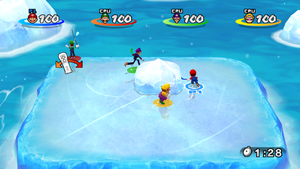 Smash Skate is a party game in Mario Sports Mix. The sport that this game is based of is hockey. Smash Skate can be played with up to four players, in three different arenas, which have each of its own features.

All arenas have an unlockable version, which can be unlocked by winning 20 matches per arena, or by clearing the proper objectives in tournaments. Usually, the unlockable arenas are a tad more complex and advanced than the beginning ones, and all the unlockable arenas tilt to make it easier or harder to knock characters off. The purpose of the game is to push the adversaries off the ground, by using a smash attack or by making an ice block slide towards the opponents.

If players make their adversary fall into the water or the lava, they gain fifty points and the adversary loses twenty. All four contestants get 100 points to begin with, and whoever has the most points when the ninety seconds are up wins the game.

In Tournament mode, the game operates a bit differently. Players are grouped into two teams. Also, only one player per team appears per round, starting with the team captains, followed by the first teammates, then the second teammates (3-on-3 only), then back to team captains. Lastly, if players knock out their opponent, they get a point for their team. The first team to earn three points wins.