Royal Raceway (referred to as "the Royal Raceway" in the Mario Kart 64 Player's Guide), alternatively named Peach Circuit[1][2] (which is also its Japanese name), is the third racecourse of the Star Cup in Mario Kart 64. It is Peach's home track in the game. The race takes place around a giant lake, and it is easy to fall into the water. There is a big jump over the lake in one section of the track. If the racer goes off the track after the jump, they can see and drive around the Mushroom Castle as it appeared in Super Mario 64, though there is no way to enter the castle. The Award Ceremony also takes place in this course at the end of each cup, where the top three drivers receive various trophies, and confetti for the big winner along with the gold trophy. The course returns in Mario Kart 8 and Mario Kart 8 Deluxe as the third course of the Banana Cup, and in Mario Kart Tour, starting with the Peach Tour.

Royal Raceway shares its music with Luigi Raceway, Mario Raceway and Wario Stadium. In Mario Kart 8 and Mario Kart 8 Deluxe, it is enhanced with live recorded instruments and given a slight jazz-funk feel. 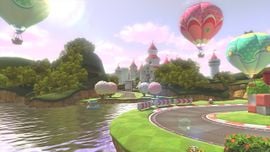 Royal Raceway reappears in Mario Kart 8 and Mario Kart 8 Deluxe as the third course of the Banana Cup, making it the only course out of the returning N64 courses in the base games that is not the final course of its respective retro cup. The sky is now blue with pink clouds, instead of pink with white clouds, both the starting banner and the bleachers have been redesigned to look more related to Peach's Castle and the iconic crown is now more detailed. The wall, which the racers drive around, still has red and white checker pattern but it now has some design related to Peach's Castle, and subtle heart details have been added. The road markings are also made up of hearts. There are now swan boats in the lake, with Toads riding in them. At the starting line, the Mario Kart logo is now transparent.

The ramp now has evenly spread out five grass arches with ringing bells, which the player can hear when passing by them, hanging on them and the rails on the ramp are redesigned to make it related to Peach's Castle. The long jump section has been shortened and is also a glider segment, which allows players to glide over the large gap and then land gently at the next section. There are hot-air balloons based on Peach, Daisy, and Rosalina's dresses, similar to the balloons present in Daisy Hills from Mario Kart 7. However, the designs for the balloons alternate every race, most noticeable in the one at the end of the glider section. There are also cherry blossom trees like in Mario Circuit from Mario Kart 7 in place of the striped evergreen trees. At the final turns, the grassland areas has been narrowed down to make it less possible for players to slip off the track and end up in the grassland compared to the original.

The road leading to Peach's Castle is now blocked off, meaning it is unable to be driven around compared to the original. Furthermore, the design of Peach's Castle and the area around it have been revised from the original Super Mario 64 version, to look more like a modern interpretation of its design. 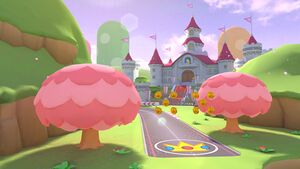 Royal Raceway reappears in Mario Kart Tour, starting with the Peach Tour. Like GCN Yoshi Circuit, N64 Yoshi Valley, and GCN Baby Park, it mostly takes on the appearance of its Mario Kart 8 iteration with elements of 3DS Mario Circuit like the hills in the background. The hot-air balloons are no longer princess-themed, instead taking their design from the ones seen in this game's iteration of 3DS Daisy Hills. The starting line banner now uses an opaque Mario Kart logo. It is also the first classic course in the game that has not appeared in any handheld Mario Kart installment. Royal Raceway uses the Mario Kart 7 arrangement of the Mario Kart 64 raceway/circuit music, used in N64 Luigi Raceway. The course is a favorite of Peachette, Pauline (Party Time), Peach (Wedding), Toadette (Explorer), Peach (Halloween), Mario (Tuxedo), Peach (Yukata), Dr. Mario, Dr. Peach, and Bowser (Santa). It is also a favorite of Dixie Kong if she reaches level 3, Peach (Kimono) and Pink Gold Peach if they reach level 6, and Mario (Happi) and Peach (Explorer) if they reach level 8. As with other courses in the game, Royal Raceway has a reverse variant, a trick variant, and reverse/trick variant referred to as Royal Raceway R, Royal Raceway T, and Royal Raceway R/T respectively; the former two were introduced alongside the regular version in the Peach Tour, while the latter was added in the 2021 Yoshi Tour.

Royal Raceway is the first course in Mario Kart Tour to appear in Coin Rush in three post-release tours, being the Peach Tour, the 2021 Yoshi Tour, and the 2021 Space Tour.

"This is an old favourite. The live drums propel the track forward, and the addition of a brass section makes it more colourful."