Sherbet Land is the first race course of the Star Cup in Mario Kart: Double Dash!!, which takes place in a different environment from the Mario Kart 64 version of the course. It takes place in an ice rink, a snowy mountain area and a larger field of ice populated with Freezies, which do not move but freeze drivers if they collide with them. On the ice rink are Skating Shy Guys. It is possible to knock them into the water, but only if the player has the time and items (such as a Star, shells, and some Special Items) to do so, which permanently knocks the Shy Guys off the track. The course reappears in Mario Kart 8 and Mario Kart 8 Deluxe as the second course of the Leaf Cup.

It is one of three courses in Mario Kart: Double Dash!! to have unique music which is not shared with any other course, the others being Dry Dry Desert and Rainbow Road.

The course starts out on a snowy road, in between two brown walls with faces on them. After the first twist with some Item Boxes there is a slight right curve into the ice rink area, with blue and red Skating Shy Guys moving around. Any contact with the Shy Guys spins the player out unless they have a projectile item like a Shell, or using a Star, which will knock the Shy Guys apart. On the right of the ice rink is a large opening in the ice, which will lead the player directly into frozen water. When Lakitu fishes racers out back to the ice, they remain within an ice cube before touching the ground. A couple of red Skating Shy Guys skate around in front of the entrance of the ice tunnel which players enter after crossing the ice pond.

Inside the ice tunnel

Inside the tunnel, there is a twisted road, containing some Item Boxes in it. Racers first take a turn to the right, then approach an ice column in the middle of the road, bisecting the path. The left side has an item box while the right side of the column has two. After the ice pillar is a very slight twist to the left that leads outside.

Outside, the player swerves left and then right in an S-turn. The road is less slippery here because it is comprised of snow and not ice. Just after this turn, players go straight for a time, with some Item Boxes there until they turn to the right to enter another zone covered in ice. 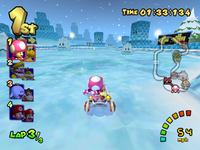 The area filled with Freezies

In this zone, there are Freezies, which stay still on the road, but freeze karts that touch them and thereafter slide around, either freezing solid any other unaware player nearby or moving towards a wall, breaking into pieces upon collision. Once frozen, the kart cannot move briefly and the items racers hold drop on the road. Certain items just bounce off them, though some powerful items can budge or destroy them completely, such as the Super Star.

The ice section is wide, but turns first to the right, then left, and then right once more, before players exit into a snowy stretch leading into the finish line and the beginning of laps two and three.

This track has one shortcut located in the Freezies' ice road. Just before taking the first turn, a player can take a path behind the ice tower and thus skip a part of the road infested by Freezies. A Mushroom on hand is needed, as the path is covered by rough snow that decreases the kart's speed.

Sherbet Land reappears in Mario Kart 8 and Mario Kart 8 Deluxe, as the second course of the Leaf Cup. The course now takes place at night, with an aurora and fireworks in the background. The starting banner has been redesigned, now using the classic Mario Kart logo in white, instead of the unique, rainbow version found in the original, and there are now seven snowflake decorations, each given a color found in a rainbow, instead of two on the top. Many of the triangular flags have been replaced with running light bulbs, and faces have been removed from the course entirely. The original course layout is unchanged and still features the Skating Shy Guys and the Freezies, but there are now two alternative underwater routes. The first one is by driving into the pond near the ice-rink, which doubles as an anti-gravity section and a shortcut to the ice cave, while the other, in similar nature to the underwater section on Rosalina's Ice World, goes underneath the ice field with the Freezies.

The course, as seen from the starting line

A Glide Ramp has also been incorporated near the Freezies' pond on the shortcut behind the ice tower. Jellybeam enemies also appear in the underwater sections. The Freezies no longer freeze players when run into; instead they break and cause the players to spin out. Unlike in the original game, they will regenerate indefinitely if they are shattered or broken by racers or items. Snowmen are added on the snowy field outside the icy cave. Lemmy, riding the Sneeker, is the Staff Ghost for this course, as he was the boss of multiple ice worlds in past games. The time to beat is 2:21.192 in Mario Kart 8, and 2:20.174 on 150cc in Mario Kart 8 Deluxe. Iggy, riding the Bone Rattler, is the 200cc Staff Ghost for this course in Mario Kart 8 Deluxe.

The course is also used as a battle course in Mario Kart 8. During the battle, most of the Freezies are absent.

"The arrangement aims to faithfully reproduce the original track. The whistle that comes in partway through is particularly nice, I think."