Not to be confused with DS Shroom Ridge.

Mushroom Bridge is the first course of the Flower Cup in Mario Kart: Double Dash!!. It takes place on a one-way highway near the coast, and the racers have to share the track with slower vehicles that almost always damage the player when struck. The highway runs over the Mushroom Bridge that gives the course its name. Mushroom City and Peach's Castle can be seen in the background near the beginning of the course. This course shares its music with Mushroom City. In that course, the bridge from Mushroom Bridge can be seen in the background, lit up due to the city taking place at night.

Mushroom Bridge reappears in Mario Kart DS as the fourth and final race of the Leaf Cup. 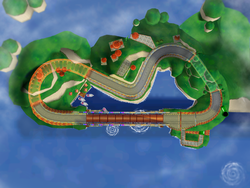 The track starts out just before the first left-hand curve. Players can take a path leading off of the main course to the right shortly after the starting line, which goes down a slope to a Warp Pipe leading to a Double Item Box as it blasts the players back onto the track. The course then heads into a curving tunnel lit up with green lights. The players catch up to the cars they share the track with in the tunnel, and after clearing the curve, they encounter three Item Boxes.

After leaving the tunnel, the track curves between the coast and some hills topped with mushroom-like huts. A path leads over the hill, but if the players do not have a speed-boosting Mushroom or Star, their kart is slowed down substantially by the dirt. Another alternate route exists in this section of track: there is a sidewalk on the left hand side of the track, and while much of it is blocked off by fencing, there are open sections granting the players access. There are item blocks on the sidewalks, and the fence protects players from projectiles thrown by the other racers, such as Red Shells; they can also avoid the traffic on the main road using this route.

After curving past the hills, there is a short straightaway; the sidewalk empties back into the road, and the racers all pass through a row of three item blocks before entering the second tunnel of the track. The tunnel curves around to the left, opening up on a straightaway leading to the bridge that gives the course its name. Halfway along the bridge are three more item blocks. There are two more item blocks on the tops of the bridge's beams, which are also inlaid with Dash Panels, meaning players who attempt to cross the bridge that way run the risk of losing control and falling off (either onto the track below, which wastes time, or into the water, which means they need to be rescued by Lakitu, which takes even longer). While riding on the top of the arches of the bridge, it is impossible to get hit by Spiny Shells. After the bridge is the finish line and the start of the next lap. The track has almost the same shape as Mario Circuit 1.

The course also features vehicles which only appear on the main roads, and do not take any of the shortcuts. The course features regular cars, buses and cargo trucks, as well as Mushroom Cars which drop Mushrooms when hit and Bob-omb Cars which explode upon impact. Moving Item Boxes also appear throughout the course.

There are subtle differences in the speed of the vehicles. It takes about two minutes for a vehicle to complete one lap around the track and each vehicle has a moving speed of approximately 15 miles per hour, as the vehicles move faster than a player's kart's backing-up speed, which is 14 miles per hour. When players follow them either by trailing them or leading them, the vehicles slightly move closer or get further from other vehicles they are behind, depending on the vehicle. The Wiggler Wagon (both the 10- and 20-wheel versions) is the slowest, followed by trucks, buses, cars, Mushroom Cars, moving Item Boxes, and Bob-omb Cars. If the game is left unpaused for more than an hour while the player still follows the vehicles, all the vehicles on the right lane will have eventually caught up to the Wiggler Wagon and all the vehicles on the left lane behind a truck will have caught up to the truck. One of the Express trucks in single-screen mode behind the Star Travel bus in the left lane has the equivalent speed of a bus, mainly because it drives in a near-straight line, as opposed to the rest, which wobble. The vehicles will make sudden subtle stops occasionally when behind a slower vehicle. Additionally, several vehicles in the game are programmed to yield to the moving Item Boxes and Bob-omb Cars coming out of the pipe shortcut. Others do not yield for them. If a player lines up all the cars using Stars on the left lane, only the Peach Beach bus on the left lane in single-screen mode (a Star Travel bus in split-screen mode) will stop for the Bob-omb Car on the left lane. If said vehicle passes the Finish Line, the Bob-omb Car on the left lane is forced to wait until there are no more vehicles before it can enter the left lane.

The course icon features the vehicles going the opposite direction. 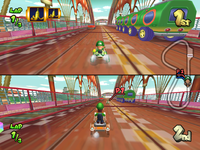 The Wiggler Wagon is shorter in length during a multiplayer race.

The vehicles that appear on the stage in Mario Kart: Double Dash!! vary based on the mode the player selects. 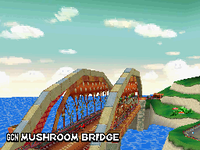 Mushroom Bridge reappears in Mario Kart DS as the fourth and last race of the Leaf Cup. The course underwent considerable changes. It is simpler, shorter, and does not have as many obstacles as in Mario Kart: Double Dash!! Most of the alternate paths were removed, excluding the shortcut over the hills. This version of Mushroom Bridge now features vehicles from Shroom Ridge, buses, trucks, and cars. Due to the DS's limited 3D graphics capability, vehicles cannot be seen from a far distance as they can disappear when far enough from the player, unlike in Double Dash!! Mushroom City and Princess Peach's Castle were removed from the background. Both of the tunnels are now lit green on the left side and lit red on the right side, compared to the original version where the first tunnel is lit green and the second tunnel is lit red. Also, the second tunnel's turns make acute angles, as opposed to the second tunnel's turns in Double Dash!! which is a natural curve. The course was never available in Wi-Fi mode.

In the course icon, the Cheep Cheep reads "Flesh" instead of "Fresh", an error also seen in the game's kiosk demo. Also, there are three "Flesh" trucks in the demo, and only one in the final version.

Mushroom Bridge returns in Mario & Sonic at the Sochi 2014 Olympic Winter Games as the setting for the Groove Pipe Snowboard Dream Event. The entire road is covered in snow and the course is mostly downhill with Warp Pipes and a cannon to take racers to the top of each island. Wiggler Wagons can be seen on roads that are inaccessible to the players and a single stationary Wiggler Wagon on the bridge serves as a small ramp for the racers. Unlike in Mario Kart: Double Dash!! and Mario Kart DS, the course now has a New Super Mario Bros-esque aesthetic.

Daisy snowboarding on the course

Like in Mario Kart: Double Dash!!, it is possible to ride up the bridge's beams which are still inlaid with Dash Panels, if done successfully without falling off a ramp will take them to Warp Pipes faster than if the lower route was taken, these Pipes still lead to the same destination as the Pipes below. Throughout the track there are also grind rails which can either lead to alternate pathways or help to boost the player's speed.[1]