DK Mountain is the fourth and final race course of the Star Cup in Mario Kart: Double Dash!!. The course takes place along two volcanoes in the middle of the jungle. The center of the track is a giant Barrel Cannon that shoots racers to the upper part of an active volcano. The course itself is complex, containing several curly paths, dangerous, tight turns and an uneven ground where drifting is difficult to control.

DK Mountain shares its music with Dino Dino Jungle, part of which is an arrangement of the Donkey Kong Jr. stage music. It returns as the third course of the Lightning Cup in Mario Kart Wii, and in Mario Kart Tour, debuting in the Animal Tour. 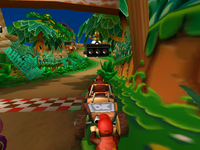 DK and Diddy Kong at the start of the race in Mario Kart: Double Dash!!.

All players start the race in the jungle. As they start the race, the players go to the base of an inactive volcano and take a curved path surrounded by the crater of this volcano. Racers are soon fired by the DK Cannon, onto an active volcano. While airborne, racers are invulnerable to items. After landing near the top of the volcano, drivers now have to drive downhill on bumpy terrain. Almost at the base of the active volcano, racers happen on a road prone to falling boulders. Reentering the jungle, players take a zigzagging path where more boulders roll down hills. During the first turn, racers should avoid falling off the cliff while swerving around. A second turn surrounds a deep ravine where players may fall. Lastly, the third tight turn leads racers to a swaying, windy rope bridge high above a deep canyon. This leads racers to the finish line.

DK Mountain is in the background of Baby Park and Dino Dino Jungle.

In the overview image of the course, the wooden bridge is missing. This is likely due to the fact that it is its own object and not part of the level geometry, allowing it to be capable of swaying, and therefore would not have been loaded in-game when the screenshot was taken.

DK Mountain reappears in Mario Kart Wii as the third course of the Lightning Cup. Some elements were added, such as ramps and mud to replace deep grass. Also, the sign that says "Donkey Cannon" in Double Dash!! now says "DK Cannon", in line with DK Summit. The straight line denoting players being fired out of the cannon was removed from the minimap, likely to match the other three courses in the game with cannons (DK Summit, Maple Treeway, and Rainbow Road). The straightaway down from the top of the mountain now has wooden ramps for the purpose of aerial tricks. Racers can also either stay on track or go off-road without losing speed, granting an advantage to avoid other racers and hazards set in the slope.

In the switchbacks with the falling boulders, only giant boulders flip racers, whereas the smaller ones disintegrate and slightly decelerate the kart. Half-pipes have also been added on the first switchback. 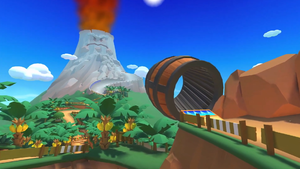 DK Mountain returns in Mario Kart Tour starting from the Animal Tour. The course retains its appearance from Mario Kart Wii, albeit with updated graphics. The "DK" letters on the left side of the cannon have been removed, and a Glide Ramp has been added before the cannon. Whereas in previous games where racers would land slightly to the left of the head of the volcano, racers now land slightly more to the right of it instead. After the road was previously widened in Mario Kart Wii at the chasm section of the course, it has now been widened out further to remove the broken portion entirely. The wooden bridge now has strings on both sides and shakes periodically providing Jump Boosts, similarly to the road on SNES Rainbow Road, and many trees are now decorated with large bananas. Similar to GCN Yoshi Circuit, GBA Cheese Land, and GBA Ribbon Road in Mario Kart 8 and Mario Kart 8 Deluxe, the course banner uses the modern Mario Kart logo, rather than the classic logo.