The Topmen, collectively known as the Topman tribe, are a tribe of robot enemies that first appear in Super Mario Galaxy. They resemble tops and are always spinning, trying to attack Mario. They appear in the Battlerock Galaxy, Buoy Base Galaxy, and the Dreadnought Galaxy. They travel throughout space in top-shaped flying saucers and are led by Topmaniac. The Topmen have also been seen in a Mario Kart Wii competition in Wi-Fi, exclusively in the Galaxy Colosseum course. They are very weak to electricity, as spinning them into electric currents instantly defeats them (with the exception of Topmaniac).

There are three types of Topmen. Firstly, the Topminis, which little yellow ones that reflect the player off if the player touches one. They can be defeated by spinning into them. There are also green ones called Spring Topmen that are bigger than the Topminis that the player can jump off like a spring. The third one is called the Spiky Topman, which is the same size as the Spring Topman. The player cannot jump on them due to the large spike on their heads.

All three types make a small appearance in Super Mario Galaxy 2 in the Space Storm Galaxy.

Topmen act similarly to the Bully from Super Mario 64. They act in the same manner and have the same powers, both not able to damage Mario with their normal body slams, although Topmen can damage Mario if he touches the spikes on their heads. Like Bullies, they push Mario into something more dangerous, like freezing water, electricity or lava, and can be defeated by pushing them in instead. Topmen appear to be based on Japanese spinning tops known as bēgoma, where two spinning tops "fight" each other. 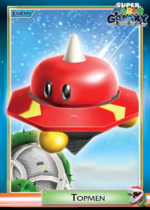 Under the rule of Topmaniac, Topmen are part of the Topman tribe and are always trying to attack Mario by spinning into him. Mario must avoid these toplike enemies in the Battlerock Galaxy and the Dreadnought Galaxy.