Waluigi Stadium is the fourth and final race course of the Flower Cup in Mario Kart: Double Dash!!. It is Waluigi's home course of the game and bears a striking resemblance to the dirt bike course Wario Stadium from Mario Kart 64. Obstacles include Fire Chains, Fire Bars, and giant wooden Piranha Plants. It shares its music with Wario Colosseum.

The course is surrounded by an audience consisting of Toads, Boos, Shy Guys, Hammer Bros., Snifits, Toadsworth, Donkey Kong Jr. and Birdos, the last of which only appears in Mario Kart Wii. The audience of the course responds to actions done by the player, such as shouting/moaning if the player is collides with an item or a fireball. This is the only course in Mario Kart: Double Dash!! to have a large audience made of 2-dimensional animated characters as opposed to 3-dimensional models.

Waluigi Stadium reappears in Mario Kart Wii as the fourth and final course of the Banana Cup. 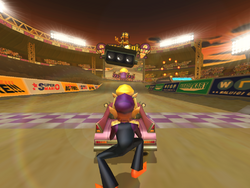 Wario and Waluigi at a time trial run at the stadium as seen in Mario Kart: Double Dash!!

The track starts out just before a bump and a turn to the right. On top of the bump, there are Item Boxes for the player to grab. On the right turn after the bump is an overhang of a later part of the track, plus minor bumps that do not serve any purpose for the player. After the overhang is a turn to the right, which has a bump and Dash Panels on it. Panels give a speed boost to the vehicle to cross a fire ring with an item box in the center, if driven through correctly, avoiding the flames of the fire ring. After the fire ring is a U-turn to the right which leads to more Dash Panels and another fire ring with an item box in the center. The player can see the lower sections of the track, previously raced on when going over this ramp.

Passing after the second fire ring, racers take a loose curve to the left around a mud pond that heavily slows the player down, regardless of acceleration (Mario Kart Wii's case would be Off-road) of the vehicle. Item boxes are found on the curve of the track. After the large oil slick is a turn to the left, that leads to a straight and wide path. The path has cardboard cut-outs of Piranha Plants, leaping out of pipes slowly to slow down the player by bumping into them. Fire Bars lie in between each Piranha Plant, rotating their arms to burn a driver and to spin out of control. When a Chain Chomp or racers under the effect of a Super Star hits these Fire Bars, for some reason, the Fire Bars will speed up for a brief amount of time. Item boxes are just found in the sides of the area.

After this part of the course is a turn that leads left and into another relatively straight section of the track. There are a pair of hills that racers can employ to do a trick in Mario Kart Wii. The straight road bends in a U-turn to the right, with another set of item boxes. The road twists at this part, and racers will slow down if they get caught running over the muddy zone to the left of the path if they don't have a speed boost item. The twisty path leads to a great jump over the hilly section, which leads to the last item box and a fire ring. Dash panels found over the ramp provide racers to cross the gap and reach the other side of the track that leads directly to the finish line; however, if racers fall into the gap, they will fall to a lower part of the track and Lakitu has to rescue them.

Waluigi Stadium reappears in Mario Kart Wii as the fourth and last course of the Banana Cup with some changes, such as the addition of half-pipes at the sides of the course for racers to perform tricks. The positions of the Piranha Plant pipes have been reversed (left to right, right to left) while the number of fireballs for each Fire Bar were extended to 4. The tiny hill near the end of the course has also been removed alongside the number of Dash Panels at the ramp reduced from 6 to 4. Also, the facial chevron signs that rock back and forth were changed from purple chevrons with a black background to light green chevrons with a translucent background. The audience also appears to be bigger than the original version. Unlike in the original, the crowd does not moan when the player gets hit by an item or hazard, but will still cheer when the player does a trick off a ramp. The members of the audience have also changed, and no longer include Snifits, Toadsworth, or Donkey Kong Jr.

A screenshot showing the starting area for Waluigi Stadium was included among other courses in a banner located within the Booster Course Pass for Mario Kart 8 Deluxe. Additionally, in version 2.1.0, a very brief snippet of the course's music was present, with data referring to the course as the second course of the Moon Cup. Finally, the internal banner exclusively uses screenshots taken from Mario Kart Tour, implying the screenshot for Waluigi Stadium was intended for Mario Kart Tour too.