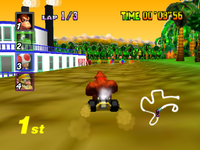 When racers go off-course, unseen "restless natives," as the instruction booklet calls them, throw coconuts at them. A large paddle steamer with "Mario" written on it cruises around the river in the jungle. The race starts off along the shoreline of the river, which leads to a massive jump across the river. Players, while jumping, can aim their landing spot. The paddle steamer may be an obstacle during this jump, but players can pass through the paddle steamer most of the time. Players then follow the winding dirt path to a narrow wooden bridge at the edge of a waterfall. The bridge leads to a small cave, which ends at the start of the track.

The original version has a glitch where it is possible to jump through the corner in the cave, resulting in as little as a 20-second race if done three times. This was not fixed in the Virtual Console release.

DK's Jungle Parkway reappears in Mario Kart Wii as the third race of the Leaf Cup. In that version, the Hammer Bros., Toads, Goombas, and Shy Guys ride the paddle steamer (only in single-player mode), the water is yellowish-orange instead of blue (to reflect the color of the sunset sky), and the jungle has been pushed back, with the coconuts that usually hit the player being removed. Another change is that inside the cave is mud, which slows down racers that try to cross it, unless they use a Mushroom, Golden Mushroom, Star, or Mega Mushroom to cut ahead without slowing down. The Dash Panel at the jump has been modified. In the N64 version, if the player is shrunk by Lightning when approaching the jump, it is possible for the player not to make it over the river. In the Wii version, the Dash Panel acts similarly to the Barrel Cannon, where the player always makes it across, even when shrunk, and also forces the drivers to go straight and prevents them from cutting ahead and/or going anywhere else. Also, the Arrow Signs are now brown with blue arrows instead of cream with red arrows. The course map has been rotated 90° counterclockwise.

This is one of two tracks in Mario Kart Wii, the other being SNES Mario Circuit 3, where it is impossible to do a trick since there are no trick ramps.

In Mario Kart Wii, a tournament took place on this track. Players had to do a GP race against Donkey Kong and Diddy Kong, who were both riding on bikes. The two Kongs had access to infinite Bananas, which caused players to spin out. This tournament was the first tournament of August 2008. It was later repeated as the second tournament of December 2009.