I have never seen piantas on the center island.
The preceding unsigned comment was added by Bspald95 (talk).

If you read carefully, they only appear in the Mario Kart Wii version.

There are none on the island. I even checked by doing the course all modes, grand prix, versus and multiplayer. Piantas are on the boat.

I think that the "natives" are a tribe of dinosaurs, possibly Rexes. What do you guys think? King Dark Bowser

I am not exactly sure what they are meant to be, but the objects thrown are clearly some kind of fruit. They are most like durians, since the design matches durians seen in other games and the color scheme matches Japanese durians as well. 24.139.200.223 17:11, 24 September 2015 (EDT) 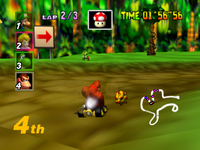