Airship Fortress is the fourth and final course of the Star Cup in Mario Kart DS. The course takes place both on a floating fortress in disrepair and on an airship. The course is inspired by the environment of boss levels seen in Super Mario Bros. 3 and Super Mario World. Other airships can be seen flying in the background.

The most notable feature in the course is the Pipe Cannon that shoots racers out to the fortress through the air. Furthermore, the track includes obstacles such as Bullet Bills, Rocky Wrenches and more.

Airship Fortress reappears in Mario Kart 7 as the third race of the Lightning Cup, and in Mario Kart Tour starting from the Pirate Tour.

The race starts with a straightaway, where a barrage of Bullet Bills are shot from a Bill Blaster of the airship and cause players to flip over if they touch them. Passing this section of the track, players turn left with a right turn shortly after and get a boost by running over a Dash Panel, entering the deck of the airship.

On the deck of the ship, racers must dodge Rocky Wrenches that pop out from their trenches, hitting racers who drive over them. Proceeding inside the airship, players take a tight left turn and reach the cellar where some crates are spread throughout the room. They may contain a Mushroom or a Banana Peel if broken. The next room features a pair of burners moving sideways that cause players to spin out if they touch the fire.

Players exit the airship by being launched by the airship's Pipe Cannon with a Dash Panel, similar to DK Mountain, aimed at a hole in the fortress tower. Following the corkscrew inside the tower, there's one last turn to finish the race. Just before the last turn, players can knock other racers off the course.

In Mission 7-7, the player must collect 12 coins in reverse as Bowser without touching a burner. 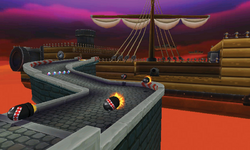 Airship Fortress reappears in Mario Kart 7 as the third course of the Lightning Cup.

Immediately following the starting line (which has the grid recolored from black and yellow to red and white while the banner was changed from the one seen in Figure-8 Circuit, Yoshi Falls, Desert Hills, and Wario Stadium to a steel-framed wooden panel displaying the classic orange Mario Kart logo), both drop-offs can be used to perform a trick and gain a small boost. The Bullet Bills have become Banzai Bills, are now shot out from the Banzai Bill Cannon at faster intervals, and are no longer visible on the bottom screen map. Some of the Banzai Bills are larger in scale compared to others. The interior of the airship has some minor changes, most notably the presence of a slight curve within the cellar, while the exterior of it has a Warp Pipe added near the Pipe Cannon (similar to Super Mario Bros. 3's) and the fortress section has additional towers. The burner room now has a ventilated floor exposing the sky underneath the airship, and the Rocky Wrenches now make sounds similar to Monty Moles. Hitting a Banzai Bill has the similar effect as getting struck by a Bob-omb, a Bullet Bill, or a Spiny Shell, causing the player to tumble and roll over sideways.

Launching out of the Pipe Cannon now encompasses a Glide Ramp. Players cannot aim their flight and they are also no longer immune to items while in the Pipe Cannon, and being hit by anything (or intentionally stowing their glider) results in having to be rescued by Lakitu.

Airship Fortress returns in Mario Kart Tour, debuting in the Pirate Tour. Unlike other courses appearing in Mario Kart 7, especially among the classic courses from Mario Kart DS in that game, it has received many notable aesthetic changes. The location of the course changes from the sky to a lava-filled ocean, as well as the time of day from sunset to sunrise (the latter also applies to N64 Yoshi Valley). Several lit torches were added to the sides of the track before the main airship and on each column of the main tower and hanging lanterns on the main airship's deck. The starting banner is now made of stone that is held up by two small towers, and the Mario Kart logo on the starting banner is the modern logo (colored cyan) as opposed to the classic logo.

The main airship and several others are a more lighter brown in color, with their masts now possessing propellers instead of sails. Hitting a Rocky Wrench now gives points to the player instead of making them spin-out, and players can now trick on top of Rocky Wrenches that poke their heads out of the ground. The tunnel leading to the main airship's cabin has also been given a redesign, with the doors being replaced by multiple portholes, lights, and groups of barrels and crates, while the wall separating the two rooms now resembling the type of wall seen inside a wine cellar. Additionally, the main airship's cabin has been redesigned to resemble a drinking bar, with Shy Guys sitting on stools, bottles on shelves, a dartboard, and several tables.

The main tower is also now part of a larger fortress, with other towers in the background. The course is a favorite of Mario (Swimwear), Daisy (Yukata), Peach (Halloween), Luigi (Lederhosen), Cat Peach, Mario (Aviator), Mario (Samurai), Dry Bowser (Gold), Bowser Jr. (Pirate), Shy Guy (Gold), King Bob-omb (Gold), Chargin' Chuck, and the Silver Mii Racing Suit. It is also a favorite of King Boo (Gold) if he reaches level 3, and Captain Toad and Birdo (Black) if they reach level 6.