This article is about the first battle course in Super Mario Kart. For other uses of the name "Battle Course", see Battle Course. 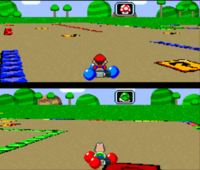 Battle Course 1 is a battle course in Super Mario Kart. It uses the background and tilesets of Donut Plains. It is a square-shaped course with some multicolored walls. It has a large open place in the middle, where players are more likely to be hit with an item. In the game's instruction booklet, Battle Course 1 is described as a practice course.[1]

Although they did not appear in Mario Kart: Super Circuit, tilemaps and minimaps exist for all four of the Battle Courses from Super Mario Kart. These could have been used as placeholders before the new ones were completed, or it may have been possible to unlock these courses like the tracks at one point. Unlike all other tracks and battle courses in the game, which are stored in chunks, these are each stored in one piece, as in Super Mario Kart.

In the Super Mario Kart instruction booklet, the course map is upside down.[1] This also applies to the Mario Circuit 1 map.

The course in Mario Kart 8 Deluxe

The course returns in Mario Kart 8 Deluxe. The course is paved in this version, as in Battle Course 4, instead of dirt. The bottom outer path is now wider and centered, and the other ones now have the same shape; like the guardrails inside the course, they are also color-coded (red, blue, yellow, and green). Each path has a ramp in the middle; the red, green, and yellow ones have a simple Dash Panel where players can perform tricks, while the blue path has a gliding ramp. The course uses a background similar to that of SNES Donut Plains 3, like in Super Mario Kart. In the middle of the course, where once there was a simple dirt puddle, now there is an inclining square grass plain with four wooden bridges leading to a wooden square in the center, with a starting banner-like structure made of colored blocks (much like the one in SNES Donut Plains 3) above the square with the name of the course written on a metal plate on each side. The colored guardrails inside the course now have ramps on their edges, in order to let players drive on them and trick off of them; the red and yellow ones swapped colors.

Outside the course, in the red corner, is a gate leading to the dirt roads on the hills outside. The sign above the gate reads "Battle Course 1".

During Renegade Roundup, the four wooden bridges in the grass plain are gone. As well, this stage only has one designated jail cell location, under the structure in the center of the arena, meaning that Renegades will be sent into it no matter where they're caught.

In the course's background, there is a billboard with the character teams on it (Mario Super Motor Team, Luigi Gusters, Yoshi Runners, and Lord Bowser), with the billboard itself modeled after the player select screen from Super Mario Kart. Mario's team is red, Luigi's team is green, Yoshi's team is blue, and Bowser's team is yellow. Toad Mushroom Powered and the Princess Peach team only appear on the billboard/scoreboard with the other four.

When holding the start signal, Lakitu is shown on the left side of the player (the same thing happens for the other battle courses in Mario Kart 8 Deluxe).