Toad's Turnpike (transliterated to Kinopio Highway on a few occasions[1][2]) is the first course of the Flower Cup in Mario Kart 64, as well as the third longest course in the game (behind Wario Stadium and Rainbow Road). It is named after Toad and pictures of him are seen on the boundaries of the racetrack. The race track takes place on a public road at night. There are vehicles driving on this course which cause the racer's kart to launch into the air if a collision between the two occurs. The overall shape of this course is roughly a figure 8, with some parts of the road with varying lane quantity. All Item Boxes of this track are located in the edge of a concave area where the road includes. Toad's Turnpike also appears as a classic course in Mario Kart 8 and Mario Kart 8 Deluxe as the last course of the Shell Cup. While "turnpike" refers to a toll road, the name was not meant to be a description of the course: "turnpike" was chosen for alliteration in English and Dutch versions. Thus, for Mario Kart 8, a turnpike service area was added at the start-finish line.

A portion of its music is used in the theme of Mario Kart 7's Neo Bowser City.

Toad's Turnpike remains straightforward in terms of track layout. It appears as a figure-8-esque course featuring cars, trucks, and buses driving throughout the course. Various points of the track have small openings with four Item Boxes in each. A thin line of grass borders both sides of the track and is blocked off by a white fence. Should the player be knocked over the fence by items such as a Red Shell, Lakitu will bring the player back to the main road.

In 50cc, 100cc, and 150cc, the vehicles go forward in the direction where karts go. The engine class also affects how fast the vehicles move; traffic moves slowly in 50cc, but it is quite fast in 150cc. The difficulty resides in the fact that the larger vehicles go slowly through the road, sometimes blocking the player (especially at the final section, where the road becomes two-laned until the finish line, and often two vehicles travel side-by-side, making it difficult to steer between them). In the Extra mode, the vehicles instead drive toward the racers at the same speed as 150cc. 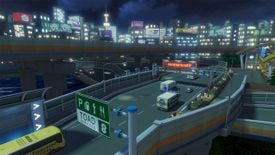 Toad's Turnpike returns in Mario Kart 8 and Mario Kart 8 Deluxe as the final race of the Shell Cup. The course now takes place in Toad City, as seen on some cars[3] and signs in the course. Many of the billboards of Toad himself have been removed and replaced with traffic signs based on traffic signs in Japan, including a Mushroom sign reading "NO LIMITS", and advertising billboards, a notable one being for a highway information radio station on the frequency of 64MHz, which is a reference to the course's origins. A service plaza has been added at the start-finish line, giving the English name more significance, and, similar to Mushroom City from Mario Kart: Double Dash!!, the starting banner now resembles an electronic message sign (or "matrix sign").

Although the basic figure-8 shape is unchanged, there are some changes. The track in general is much shorter and the roads are wider compared to the original. Some of the walls are now anti-gravity sections with Dash Panels, which help avoid the traffic, but the route is slower. Furthermore, the start-finish line is now on the bridge over the middle of the loop, while the merging starting area has been removed. Players can use a Glide Ramp to fly over this part of the track, but falling onto the bridge requires the player to be rescued by Lakitu.

The map also chooses at random from several traffic pattern sets and uses them for the race, allowing for a differing degree of difficulty each time; in some patterns, all vehicles are traveling the same direction as the racers. In other patterns, the far right lane (left in Mirror Mode) is traveling towards the racers, mirroring the EXTRA mode from Mario Kart 64. Vehicles also indicate that they are changing lanes via orange turn-signal lights when the highway merges from three lanes into two. Like in the original, the vehicles tumble over any racers that drive into them, but a Super Star launches them into the air and render them harmless.

The course, as seen from the starting line

Item boxes, as well as coins, now move along the road, while the item boxes in the openings of the track are replaced with coins. The yellow school buses are now replaced by different colored transportation buses while the light blue tank trucks are gone. A few traffic helicopters are added, and the cars take a more realistic appearance, with some cars in different color schemes based on Toyota Comfort taxis, popular in Japan, and the vehicles being scaled down to a size more proportionate to the racers. The empty auto carrier trucks have Glide Ramps, and the pink pickup trucks have a surfboard which serves as a simple ramp. Should one land on a normal truck or bus, some have a small ramp. Also, vehicles cause players to flip only if they drive quickly enough into the vehicle.

This is one of the two retro courses where the anti-gravity sections are optional, the other being GCN Sherbet Land.

Toad's Turnpike is also used as one of the battle courses in Mario Kart 8. The coin sections now have a single item box. Item boxes are also stationary. The pink pickup trucks and glider trucks are also absent.

The arrangement on this track aims to give a sense of travelling at speed. It's a really fun course to watch, what with all the billboards and signs that pop up. Just be sure to keep your eyes on the road, and don't cause any accidents.