Tick-Tock Clock is the second course of the Star Cup in Mario Kart DS. It is modeled after the course Tick Tock Clock from Super Mario 64 and its remake, with similar mesh flooring and the familiar yellow pendulum. It takes place inside a giant grandfather clock with moving gears, pendulums, and clock hands. This race returns as a classic course in Mario Kart 8 and Mario Kart 8 Deluxe as the first track of the Lightning Cup. 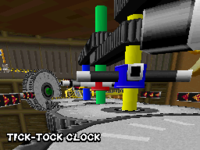 The road of this course is built from Kanaami Roads. Near the start of the course, the racers will drive around a clock, where they can take a speed boost by running over some Dash Panels. After the clock, an ever-ticking pendulum can knock the drivers off if they collide with it. Throughout the course, there are rotating gears, which lead the karts in 360˚ arcs around the center. After the gear section, the player enters a short zigzag section before entering a second clock section, smaller than the first one, having Item Boxes moving around. At the end of the course, there are two gears protruding from the ground like tires, which spin in opposite directions of each other. If the drivers go up the gear which is turning away from them, drivers go slightly faster; if they go up the gear turning towards them, they instead are slowed down. All gears in the course change direction every 45 seconds. Clock hands are another obstacle that spin back and forth, spinning out any kart that touches them. If the player hits the pendulum while racing, it rings.

Missions 6-7 and 7-3 are located here. In mission 6-7, Toad has to collect 40 coins in the first clock area, and in mission 7-3, Donkey Kong has to complete two laps within the time limit. In the latter, more pendulums are added and the clock hands are faster. 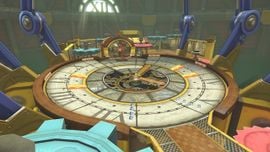 Tick-Tock Clock reappears in Mario Kart 8 and Mario Kart 8 Deluxe as the first race of the Lightning Cup. While the layout of the track is mostly unaltered, it features more detail than the original. The background is redesigned with moving gears and other clock related objects placed around the track, compared to the original which was a large, empty room.

The starting banner is now shaped like an old alarm clock, as well as the Mario Kart logo using its modern design, and Roman numerals replace the Arabic numerals. An extra pendulum was added before the first pendulum of the track and drop offs were added after each pendulum, both of which now feature a Lightning Cup logo. The pendulums now act as walls instead of damaging racers who come in contact with them. Toads can also be seen cheering on the sidelines. The clock hands now spin very slowly and are shorter than in the original track, and now can be used as trick ramps rather than spinning out any players who run into them. A pair of Glide Ramps have also been added before the rotating gears, alternating between that state and a regular ramp akin to 3DS Music Park. The gears are now red and blue and feature trick ramps on the cog teeth. This section is also enclosed, unlike in the original. Towards the end, the stopwatch has been fused to the track and now constitutes the final turn before the straightaway leading up to the finish line, and the clock hands serve as a tricky shortcut, similar to how they do on the first clock. Some of the Kanaami Roads on this course have been replaced by normal road, while the rest are redesigned.

The live-recorded remix of the music was also greatly updated to be much more vibrant compared to the original, while the intro sounds more like an actual alarm clock. The gears around the track turn in time to the music. The final lap version of the music is much faster compared to the normal version (as well as the final lap version of the DS original) than other retro courses.

"The clock is much bigger than in Mario Kart DS, so we decided to use an orchestra for this track. At the same time, we wanted to make sure we didn't lose the surreal feel of the original. The electronic tones and other effects at the start of the track work really well, I feel."