Baby Park is the third course of the Mushroom Cup in Mario Kart: Double Dash!!. Being a simple oval loop with no hazards, it is the shortest course in length in the series, excluding the unused "Test Circle" course found in Mario Kart DS and DK Jungle from Mario Kart Arcade GP, only taking around ten seconds to complete a whole lap.

As the name implies, the course takes place in an amusement park which includes various elements from the Yoshi franchise, and serves as Baby Mario and Baby Luigi's home course. The track is a platform hanging from a large support complex, where a roller coaster runs above and around the course and a pink train runs over the rails. It is possible to collide with the roller coaster, though it is very difficult to achieve. The roller coaster obstacle was removed in the DS version and it returned in the Wii U and Switch version of the track as an aesthetic effect. 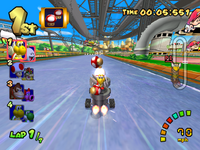 This is the third course of the Mushroom Cup. One half of the floor is blue and the other half is pink. It has various pictures of characters from the Yoshi's Island series on it, including Baby Mario and Baby Luigi. Due to its short length, this course has seven laps instead of the traditional three, making it one of only two courses in Mario Kart: Double Dash!! to not be a three-lap course (the other being Wario Colosseum, which has two laps). DK Mountain can be seen in the background.

Baby Park's music is also used in Balloon Battle on Tilt-a-Kart, though with more cymbals and the opening notes are a cover version of the Super Mario Bros. ground theme. The music starts in F major, then goes to F#/G♭ major, and then G major before looping back to F major.

The file names for this course, including ghost data, use "BabyLuigi" as a prefix or suffix.

The staff ghost of the track uses Baby Mario and Baby Luigi, driving the Goo-Goo Buggy. They appear when the player completes the race in 1:14.000 or less. 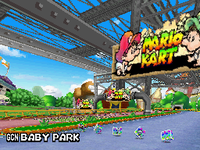 Baby Park reappears in Mario Kart DS as the last track of the Banana Cup. The course's map has been rotated 180 degrees. This time around, it has five laps instead of seven and lacks the roller coaster obstacle. Missions 2-8 and 3-Boss take place here. It was available in Wi-Fi. On the final lap, the music starts playing in F#/G♭ major instead of A major.

This version of Baby Park and the Mario Kart 8 iteration of N64 Rainbow Road are the only courses to differ in lap count as a classic course, excluding courses originating in Super Mario Kart and almost all of the classic courses in or from Mario Kart Tour.

Like in Mario Kart: Double Dash!! , when the player crosses the finish line to begin the next lap, Lakitu is shown on the left side of the player, holding the lap count signs.

The staff ghost of this track in this game uses Toad in the Mushmellow, with a time of 50.920 seconds.

Baby Park also reappears in Mario Kart 8 as a heavily-revamped DLC classic course and the first track of the Crossing Cup.

One of the major changes made to the race course is that the entire track is now slanted, making it entirely an anti-gravity race track. The pink and blue parts of the floor are now split across the track's length instead of its width (with the colors on the turns instead of the parallel tracks). The park background has received many changes, such as the addition of a "Baby Castle" (which is a nod to Cinderella's Castle at the Magic Kingdom), new rides added like a redesigned Luigi's Mansion as a haunted house attraction, and some of the returning background rides being heavily redesigned, like the Bowser's Ship ride and the Ferris wheel, now resembling the Pinna Park Ferris wheel from Super Mario Sunshine. The hot-air balloons from N64 Royal Raceway appear in the background of the course. The starting banner now shows Baby Mario and Baby Luigi with their shirts, overalls and shoes on as opposed to being solely in diapers like the previous versions. They also have been given slight animations that are found on rides, where they move back and forth. The roller coaster makes its return, though unlike the original, it is impossible to collide with it.

The race on this course has seven laps just like in the original and the revamped music now increases in tempo (and goes up a key) after every lap, making it the first classic course to do this (lap 1 in F major, lap 2 in F#/G♭ major, lap 3 in G major, lap 4 in G#/A♭ major, lap 5 in A major, lap 6 in A#/B♭ major, and lap 7/the final lap in B major). On the final lap, the guard rails start to flash and light up in multiple colors, and like with N64 Rainbow Road, the last part of the music starts to play instead of the beginning of it. During replays and on the soundtrack, the music plays in a style similar to the original game (going up in key after each "verse", but not increasing the tempo).

Baby Park is the only classic course and one of four courses (along with Mute City, Big Blue and Sky-High Sundae) to be entirely an anti-gravity race track. This is the shortest track in the game and the only track that does not have exactly three laps or sections. It is also the only track in Mario Kart 8 where players cannot perform tricks, and it is the only course aside from the three different Rainbow Roads to have its map in colors aside from blue. It is also the only classic course in the Animal Crossing × Mario Kart 8 DLC pack that has already appeared at least once as a classic course, and one of only two tracks in Mario Kart 8 that has appeared more than once as a classic course at time of release and does not originate from Super Mario Kart, the other being GCN Yoshi Circuit.

A statue resembling the one in the course Toad Harbor can be seen in the background, but instead of Peach in a Statue of Liberty pose, a pink gold version of Baby Peach can be seen holding a star (referencing the Partners statue seen in front of Cinderella's Castle).

This track, alongside the other DLC content, is available in the core game of Mario Kart 8 Deluxe. However, the map colors are drastically toned town so that they appear more gray, to resemble maps seen on other courses. In Mario Kart 8 Deluxe, this is one of two tracks not to have Double Item Boxes, the other being DS Shroom Ridge.

View of the starting line

Baby Park returns in Mario Kart Tour starting from the 2022 Cat Tour, being the third course from Mario Kart: Double Dash!! to reappear in Mario Kart Tour and the first since GCN Yoshi Circuit and GCN Dino Dino Jungle at the game's launch in the New York Tour seventy tours prior. Like GCN Yoshi Circuit, N64 Royal Raceway, and N64 Yoshi Valley, the course is based on its Mario Kart 8 iteration, but uses the music from its original appearance in Double Dash!! (though it still goes up a key and increases in tempo at each lap like in Mario Kart 8) and has five laps like in Mario Kart DS (lap 1 in F major, lap 2 in F#/G♭ major, lap 3 in G major, lap 4 in G#/A♭ major, and lap 5/the final lap in A major). Unlike the previous iteration, the course is no longer in anti-gravity and appears as a flat course. The Baby Mario and Baby Luigi pictures on the starting banner have been removed, and the banner's poles have now been redesigned. Like this game's iteration of N64 Royal Raceway, the hot-air balloons are no longer princess-themed, instead taking their design from the ones seen in this game's iteration of 3DS Daisy Hills. The roller coaster has once again been removed, likely to allow players to go outside the loop in the T variation. The guardrails are now colored blue. The Baby Peach statue is now fully golden, the Luigi's Mansion attraction now uses its original design, resembling the mansion's design from this game's iteration of DS Luigi's Mansion, and the Koopa Paratroopa gift shop has been removed. The course's minimap has also been rotated 90° and is positioned off-center in-game, likely also to accommodate the T version. This course is a favorite of Mario (Santa), Daisy (Holiday Cheer), Peach (Wedding), Mario (Golf), Dr. Mario, Cat Mario, and the Wario, Chain Chomp, and Petey Piranha Mii Racing Suits. It is also a favorite of Daisy (Sailor) if she reaches level 6. As with other courses in the game, Baby Park has a reverse variant and a trick variant, referred to as Baby Park R and Baby Park T respectively.

Baby Park's R variant has static Item Boxes and added ramps and Dash Panels, while the T variant takes players outside of the loop and only has three laps (lap 1 in F major, lap 2 in F#/G♭ major, and lap 3/the final lap in G major), making it the only course in the game with a lap count difference between variations.

Unlike most courses, all of Baby Park's current bonus challenges feature more than one lap. This is likely due to the short length, which would cause the bonus challenge to end too quickly.

Several characters that are important to the Yoshi franchise appear to have their own rides around Baby Park. They are listed below.

"On this title, the pitch of the music goes up after every lap. It'll really make your head spin! The horn and guitar parts give this arrangement tons of energy."