Yoshi Circuit (also called Yoshi's Circuit[1]) is the third racecourse of the Star Cup in Mario Kart: Double Dash!!. The course is unique in that it is shaped like Yoshi himself, making it the only course in the Mario Kart series to be shaped after a playable character. There are many turns in this course, including a particularly sharp hairpin turn located at Yoshi's "tail". There are also many Piranha Plants at the sides of the road, nipping at racers who get too close. 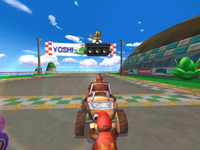 The start of the race

The race first starts at the straight road under Yoshi's "shoe." As the racer progresses for a little bit, the player will make a slow curve to the right. Piranha Plants are present on the grass on the right of the course, and to the left, there is water that will stop the player in their tracks if fallen off. Past the curve is a short straight road and a turn left. After the turn left is another straight road and soon, another curve to the right, which would be going around Yoshi's "hands". After the "hand" curve is a straight road, and another turn to the left that leads to an overhang, which starts a large curve around Yoshi's "nose".

There are three shortcuts. After the first left turn, if a player gets a Mushroom from an Item Box, they can use the Mushroom to jump over the moat, not having to maneuver around Yoshi's "hand". It is also possible to do this without a mushroom, instead using a well-placed powerslide. In the DS version, however, the shortcut can be done with a well placed jump over the moat if the player is using a high acceleration kart.

The second shortcut comes right after the tunnel, and it requires the player to use another Mushroom to propel themselves from the course into a tunnel, which emerges into a straightway. There are also Double Item Boxes in the tunnel. This second shortcut is removed in every following version.

A third, minor shortcut can be performed by boosting behind the Piranha Plants through the grass before the finish line. 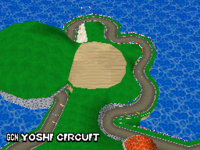 The course in Mario Kart DS

Yoshi Circuit reappears in Mario Kart DS as the fourth and last race of the Lightning Cup. Some edits have been made to the course for its reappearance in that game. One of the most significant changes is that the Piranha Plants are no longer in Warp Pipes and bite at racers that drive too close, instead being the small, constantly-biting variation that is seen throughout other courses. Another somewhat significant change is that the number of "spines" on the back of Yoshi's "head" have been reduced from three to two. The tunnel shortcut was also removed. Some minor graphical changes that do not impact gameplay include Yoshi's "fingers" not being there, the windows in the tunnel being larger, Yoshi's "cheek" being made of sand instead of water, the helicopter not being present, and the banners near the finish line being removed. The course was available in Wi-Fi.

Like in Mario Kart: Double Dash!!, when the player crosses the finish line to begin the next lap, Lakitu is shown on the left side of the player, holding the lap count signs.

Overview of the course in Mario Kart 8

Yoshi Circuit appears for the second time as a classic course included with The Legend of Zelda × Mario Kart 8 downloadable content in Mario Kart 8, and as part of the core game in Mario Kart 8 Deluxe, as the first course of the Egg Cup. Many changes have been made in this version of the course. The "shoe" is now a small town near the starting line, with a dock, several small islands and sailboats nearby. The course banner now resembles an archway connected by two street lights, with two sets of flower bouquets on both sides and a ornament of a Gold Yoshi posing on top of a silver and gold Yoshi Egg.

The Mario Kart logo on the starting banner is red and uses the modern design instead of the classic one used for most of the classic courses from games before Mario Kart DS. GBA Cheese Land and GBA Ribbon Road also use this design.

The Piranha Plants before and after the starting line have been removed and replaced by tires similar to the ones on GBA Mario Circuit, while the ones in the "spines" have been re-positioned. The flower patches in the "spines" are no longer blocked off and can be cut through for a shortcut. The Yoshi Helicopter has been replaced by a green Mario Kart TV helicopter, from the view above the course. The second shortcut has been removed entirely similar to the DS version; this time, the path is entirely blocked with guard rails. The first shortcut now has a waterfall which players must drive through. Players can now perform tricks off the grass ramp at the first shortcut if they are fast enough. The "saddle" now acts as a place to shade spectators. Also, a sign saying "Yoshi Tunnel" can be seen on both ends of the tunnel around the "nose". The course is more straight, and the dips and inclines at the "spines" and the "saddle" have changed. Red Yoshi on the B Dasher kart with Standard tires and the Super Glider is the Staff Ghost for this course. Light-blue Shy Guy, using the P-Wing with Slick tires and Parachute glider, is the 200cc staff ghost for this course.

The new, live-recorded background music was rearranged with new instruments including guitar, saxophones, and drums.

It is one of only two courses that does not have any Dash Panels, Glide Ramps, underwater sections, or anti-gravity sections, with the other being SNES Rainbow Road. Coincidentally, both of these courses are part of DLC Pack 1. Also, it is one of only two races in Mario Kart 8 that has appeared more than once as a classic course at time of release and does not originate from Super Mario Kart, the other being GCN Baby Park. 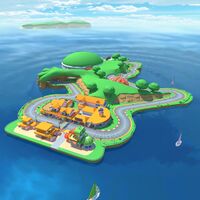 Yoshi Circuit reappears in Mario Kart Tour, starting with the New York Tour, alongside New York Minute and many other classic courses. It mostly takes on the appearance of its Mario Kart 8 iteration (the same applies to N64 Royal Raceway, N64 Yoshi Valley, and GCN Baby Park). This is likely due to its lack of anti-gravity sections on the course in Mario Kart 8. The Mario Kart logo on the starting banner has been reverted to its classic one. Most trees have been removed, and the jump near the start of the course is obscured by wooden cutouts of Piranha Plants rather than a waterfall. Otherwise, the track changes little from its appearance in Mario Kart 8. This course is a favorite of Yoshi, Red Yoshi, Green Shy Guy, Peach (Wintertime), Yoshi (Reindeer), Yoshi (Egg Hunt), Mario (SNES), Fire Rosalina, and the Toad and Bronze Mii Racing Suits. It is also a favorite of Black Yoshi and Petey Piranha if they reach level 3, and Birdo (Black) if she reaches level 6.

"For this track, in order to fully bring out Yoshi's whimsical nature, we swapped the brass part used in the original track with a saxophone ensemble. We also rerecorded that characteristic choppy guitar sound live. We left the whistling part untouched, though!"

References to the Mario franchise[edit]

Daisy Cruiser as seen in the background