Daisy Cruiser is the third course of the Flower Cup in Mario Kart: Double Dash!!. It is Princess Daisy's home track of the game. The course takes place, as the name suggests, on a large cruise ship that has various floors and a giant logo of Daisy's head on the sides. The cruiser also has a dining room with moving tables that act as obstacles for the player, a large pool that has a picture of Princess Daisy at the bottom, and a set of hallways. Also included is a basement leading to a giant air vent, and various flower motifs throughout the cruiser's design. Piantas can be seen in the cruiser as well, waving at the players. This course shares its music with Peach Beach, where Daisy Cruiser can be seen in the distance. Daisy Cruiser is also seen in the backgrounds in Yoshi Circuit and Mario Kart Wii's Daisy Circuit.

Daisy Cruiser reappears in Mario Kart 7 as the third course of the Leaf Cup, and in Mario Kart Tour starting with the Ocean Tour. 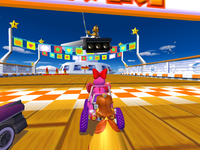 Birdo and Daisy at the starting line

The player starts out in the top deck where there is a turn right that leads into a straight metal road that has Item Boxes moving left and right, unlike stationary Item Boxes. After the road is a staircase left that leads to the side of a circular pool with Daisy's picture in it on the right of the track. If players fall into the pool, they will get picked up by Lakitu and bring the player back up to the road.

After the pool is another winding metal staircase, that leads downhill and into the left. After a left turn, there is a straight aisle that leads directly to the cruiser's dining room. The tables in this room slide from left to right, slowing down the player getting stuck in the tables. Item Boxes are also found sliding left and right, just like the tables. 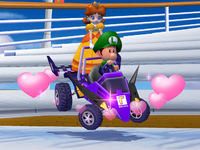 After the dining room is a 90 degree turn right, and another 90 degree turn left. The player will see Item Boxes and a hole to the right. If the player takes the Item Box route, they will come to another 90 degree turn left and another turn right, which leads outside again. If the player falls into the hole, they will enter a cellar with a Double Item Box, before entering a cannon that takes them back to outside the ship. Racers then reach the bow of the ship, where the track forms a U-turn in it to the right and then bends into another straight path. In one-screen mode only, the player may bump into hanging life-savers, but it does not affect the player's speed. There is a straight staircase that leads uphill and after, the deck with the finish line in it. After the finish line is the start of the course again, as well as another lap.

Daisy Cruiser reappears in Mario Kart 7 as the third course of the Leaf Cup. The course's map has been rotated 180 degrees alongside the Stars and arrows both no longer having eyes on them and the classic Mario Kart logo on the starting banner being resized and having altered gradients. Right after the starting line, instead of being forced to head right, one can now drive through the once-blocked left path. The floor of the passage on the right is now wooden. One can also drive through the swimming pool. All of the Piantas have been replaced with Miis. The banquet room now has fewer tables. Also, the cellar under the floor has become an aquarium filled with water, having Miis on the sidelines watching, a Unagi swimming around, and Clampys that, similarly to the ones on Cheep Cheep Lagoon, carry items inside. The hanging life-savers were removed. The cannon was also removed, instead having two Dash Panels, allowing the player to drive through it normally.

This course does not have any intended shortcuts, but three glitch shortcuts, all of which are performed on the right-hand path at the start of the course:

View of the starting line in Mario Kart Tour

Daisy Cruiser reappears in Mario Kart Tour starting with the Ocean Tour. The track is based on its Mario Kart 7 appearance; however, there are no more Item Boxes sliding along with the tables in the dining room. The Clampies in the aquarium area no longer contain Item Boxes in them. The track has undergone a slight redesign, with the stripes near the bottom of the ship being brighter shades of red and orange, the gears near the front are a brighter color blue, and the ground around the pool and towards the end of the track now being colored green. The dining room and the hallway just after have been redesigned. Gardens with Yoshis and Toads have been added on both sides of the finish line, and the banners now have pictures of various items from the Mario Kart series, notably the Mushroom, Super Star, Fire Flower, Super Leaf, Heart, and Super Bell. The mast at the bow also appears to be taller. Much like other course remakes in this game, every instance of 3D artwork is replaced with 2D artwork, such as the Princess Daisy logo on the side of the cruise and the Daisy artwork inside the pool.

This course is a favorite of Daisy (Swimwear), Daisy (Fairy), Daisy (Thai Dress), Daisy (Sailor), White Tanooki Mario, and the Pastry Chef and Dolphin Mii Racing Suits. It is also a favorite of Toadette (Sailor) if she reaches level 8.

The course also appears as Daisy Cruiser R (reverse) and Daisy Cruiser T (with ramps). Both variants allow for the top of the ship to be driven on, with the former providing the option after hitting a Glide Ramp and the latter having ramps leading up to it, with the top serving as a second pair of split paths alongside those from the main route. In the reverse variant, the entry to the aquarium is closed.