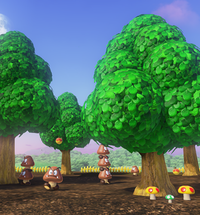 Goomba Woods as shown in the Mushroom Kingdom brochure.

Goomba Woods is a location in the Mushroom Kingdom in Super Mario Odyssey. It is located behind Peach's Castle. Goomba Woods is a small, wooded area infested with Goombas and Goomba Towers. There is a small river running along Goomba Woods. It is also filled with trees, small mushrooms which Mario can kick, mushroom platforms which he can bounce on, and fruit which can be eaten by Yoshi. A sheep can be found on the west side of Goomba Woods, and another can be found near the east side. The Power Moon "Mushroom Kingdom Timer Challenge" can be collected here, as well as a few regional coins. There is a large seed found in Goomba Woods, which can be used to grow a beanstalk leading to the rematch with Torkdrift.

According to the Mushroom Kingdom brochure, Goomba Woods was originally planned for mushroom cultivation, until a large number of Goombas moved in while the mushrooms flourished. Despite this, the brochure claims that it is still a nice place for a stroll, provided tourists are not afraid of the Goombas.