This article is about the minigame featured in New Super Mario Bros. and Super Mario 64 DS. For the Glitz Pit team in Paper Mario: The Thousand-Year Door, see Bob-omb Squad (group).
Not to be confused with Bomb Squad. 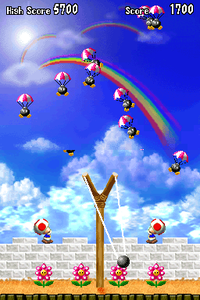 Bob-omb Squad is one of Wario's minigames in Super Mario 64 DS and a Variety minigame in New Super Mario Bros. The gameplay is similar to that of Lakitu Launch.

In this minigame, the player must hit the falling Para-bombs with a black ball attached to a slingshot before they destroy the player's garden of Power Flowers. The player has to aim the slingshot with the stylus, and releasing it fires the ball. The player scores 100 points for each Para-bomb they hit, but if they hit multiple Para-bombs in one shot, the points will be multiplied up to 3,200. Occasionally, Lakitu appears. If the player hits Lakitu, all Para-bombs onscreen will blow up, but the player will receive only 100 points per Para-bomb (for example, if ten Para-bombs are onscreen, the player will receive 1,000 bonus points). As the player's score goes up, the descent speed of the Para-bombs increases. The minigame is over when all four of the Power Flowers at the bottom of the screen are destroyed by Para-bombs.