Admiral Bobbery (usually just referred to as Bobbery) is a Bob-omb who is Mario's sixth (or seventh, depending on whether the player has completed Ms. Mowz's trouble at this point) partner in Paper Mario: The Thousand-Year Door. His wind-up key is the helm of a ship. His wife, a female Bob-omb named Scarlette, died of a mysterious illness prior to the events of the game.

If the player recruits Ms. Mowz into the party before Bobbery and then uses a healing item on a partner outside of battle, Bobbery's name is listed above Ms. Mowz, even if he has not joined the party yet.

A sprite of Admiral Bobbery.

Many years prior to the start of the game, Admiral Bobbery was infatuated with a Bob-omb named Scarlette. He loved her madly and proudly, only matched by his love of the sea. A renowned sailor, Admiral Bobbery spent most of his time traveling on the oceans, and Scarlette would patiently await his return.

One particularly icy winter, Scarlette fell ill while Admiral Bobbery was out at sea. Her condition rapidly deteriorated, and by the time Bobbery returned, she was dead. Aghast and deeply saddened, Admiral Bobbery blamed himself for Scarlette's death, thinking that he could have nursed her back to health had he been there. Tormented by nightmares of Scarlette, Bobbery eventually vowed to never sail again out of guilt for his perceived failure to his beloved.

Unbeknownst to Bobbery, Scarlette gave Podley an Old Letter prior to her death, telling him to give it to her beloved. Podley agreed to her last request, but found himself unable to do it when he saw how depressed Bobbery was, implying that he thought the letter would only make Bobbery feel worse. Nonetheless, he tried to help his old friend however he could. When introduced in Chapter 5, Admiral Bobbery appears to have settled down in Rogueport, drowning his grief in the bar.

Bobbery can optionally be visited during Chapter 4 once Mario learns Tube Mode.

In Chapter 5, Mario meets up with Admiral Bobbery needing a navigator to get to Keelhaul Key, though he denies his identity. After checking with Professor Frankly, Mario returns to renew his request to the old sailor; he admits that he is Admiral Bobbery, but still refuses to help.

Further advice from Professor Frankly sends Mario to Podley's Place. After hearing Admiral Bobbery's depressing tale, Mario receives the Old Letter from Podley, who requests that Mario give it to Bobbery. Upon reading the letter, which contains Scarlette's encouragement for him to embrace his other love of the sea, Admiral Bobbery agrees to join Mario.

However, the ship is attacked by Embers during the voyage and sinks; when the survivors wash up on the shores of Keelhaul Key, Bobbery is declared missing along with Four-Eyes and the Toad sailor. The three are found soon after by Mario during an island exploration, once again being attacked by the pirate ghosts - the admiral makes a heroic sacrifice by distracting the ghosts and allowing the others to escape back to camp.

Venturing into the jungle once more leads the player to a near-death Bobbery, who thanks Mario for convincing him to take one last voyage out to sea before requesting a bottle of his favorite drink - Chuckola Cola - as his last wish. After exchanging a Coconut with Flavio for the drink and returning it to Bobbery, he consumes it and presumably passes on. However, it is quickly made apparent that the admiral is only asleep rather than dead - after a 'wake-up whack' from Mario's hammer, Bobbery joins his team as his next party member. 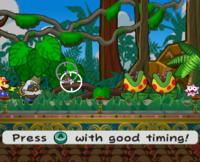 A retired Bob-omb sea captain, Admiral Bobbery assists Mario in his quest with his bomb-related attacks and abilities. Out of all the partners in the game, he has the highest HP total (with 20 in Initial Rank, 30 in Super Rank, and 40 in Ultra Rank), has the highest attack power, and is the only one who can give himself the Payback status effect. Despite Bob-omb enemies having defense, Bobbery does not have default defense, unlike Koops. In battle, Bobbery is also useful for clearing fog by using his Bomb move or by using Appeal. Outside of battle, he uses the same ability as Bombette from Paper Mario to explode and blow up cracks. However, unlike Admiral Bobbery's counterpart, he can be thrown onto high ledges to explode.

He also proves useful when Mario and co. visit Fahr Outpost in search of the cannon that can shoot them to the moon, as he helps to improve relations between Mario and the resident Bob-ombs and explains their situation to the mayor. It is during this sequence that Bobbery reveals he once visited the outpost before, though the details of the trip are never given. Despite these hints being given, in the prologue of Chapter 7 when Professor Frankly mentions the only way to reach the Moon is by using the cannon in Fahr Outpost, Bobbery says, "This Fahr Outpost already sounds like it will be a bother to reach," claiming he knows no bounds of its area.

After defeating the Shadow Queen, Admiral Bobbery joins Cortez and sails the seas with him.

In Super Paper Mario, Admiral Bobbery appears as a Catch Card won by winning the Duel of 100 in the Sammer's Kingdom. He also makes a very brief appearance during the introduction where he, along with all the other partners from the previous Paper Mario installments are in a photo at the Mario Bros.' House. Lastly, Francis has a plush toy of Admiral Bobbery at his fortress. He along with all of Mario's partners from the first two games were planned to appear in this game but were removed for unknown reasons.

Although not directly referenced, he is alluded to in Paper Mario: The Origami King. If Mario examines the steering wheel in the wheelhouse of the Princess Peach with Bob-omb, the latter comments, "I used to dream of being a ship captain... ooh, or an admiral! I bet I'd be a pretty cool admiral."

Goombella can use Tattle on Admiral Bobbery after Mario stumbles into Bobbery's house in Rogueport, at Rogueport harbor before taking off to Keelhaul Key aboard the S.S. Flavion, and again in Keelhaul Key before Bobbery joins Mario's party.

An early variant of Admiral Bobbery