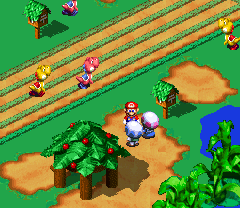 The newlywed couple on their honeymoon.

“Mario! I'm having the time of my life! Just got married,...stayed in the suite... Oh, life is just GREAT!”
—Raz, Super Mario RPG: Legend of the Seven Stars

Raz is a male Toad who marries Raini during the events of Super Mario RPG: Legend of the Seven Stars. He wears blue and green clothes and has light blue spots on his mushroom cap.

During Mario's first visit to Mushroom Kingdom, Raz tells him about his engagement to Raini and that they are planning their wedding. However, it gets postponed because of Mack and the Shysters' invasion. After Mario and Mallow save the kingdom, Raz and Raini decide to be wed in Marrymore, the marriage capital of the world.

During their wedding in Marrymore, Booster arrives and kicks everyone out of the wedding hall so he can get married to Princess Toadstool. When Mario stops Booster, Raz and Raini properly have their wedding.

After their marriage, Raz and Raini decide to spend their honeymoon on Yo'ster Isle. If Mario speaks to him at this point, Raz asks him if he knows what Grate Guy's Casino is. After Mario gets the Bright Card, Raz tells Mario that they may meet in Grate Guy's Casino. However, Raz is never seen there. Raini also tells Mario that Raz cannot hop onto Yoshi. He and Raini are seen here during the ending, watching the Mushroom Derby.

One of the wishes found on Star Hill belongs to him. His wish is to start a family soon.