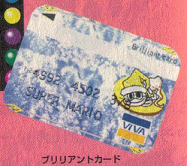 The Bright Card, as pictured in the Japanese Strategy Guide. The top-right corner of the card reads "Brilliant Card"

The Bright Card (also known as the Brilliant Card) is a special item needed to get into Grate Guy's Casino in Super Mario RPG: Legend of the Seven Stars. The casino is found in Bean Valley, near Land's End after entering a pipe and jumping 3 times near a Chomp Chomp. The card is attained by playing and winning Knife Guy's guessing game. To win the card from Knife Guy, Mario must win his juggling game a total of twelve times in a row. After beating Knife Guy at his game and winning a variety of Mushrooms, Mario gets the Bright Card. An elderly Toad in the Marrymore inn is willing to pay a high price for this rare card; he first offers 100 coins, then five Frog Coins and finally ten Frog Coins. It can also be sold at a shop for 777 coins. Mario cannot get another Bright Card after throwing it into the Waste Basket, and Knife Guy's game will be won an unlimited number of times just receiving a random type of Mushroom. The player can buy back the card back from the old Toad, but it will cost 15 Frog Coins.