“I'm sick and tired of Philistines like you ERASING all of my hard work, man. You probably haven't heard of me, right? Figures. When was the last time you even went to a gallery? Pfft. Don't answer. I'm gonna give you an art lesson for free. The name's Jean-Pierre Colored Pencils the 12th. I represent the Legion of Stationery, I'll have you know! Anyway, I'm guarding this streamer, and I'll scribble on your flat face if that's what it takes to stop you.”
—Colored Pencils, Paper Mario: The Origami King 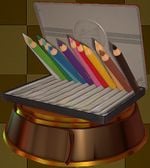 Colored Pencils, The Missile Maestro (also referred to as Color Pencil[1] and Jean-Pierre Colored Pencils the 12th), is a member of the Legion of Stationery who guards a spool for the red streamer and the boss of Overlook Tower in Paper Mario: The Origami King. He is an oversized red tin pencil case sporting King Olly's logo on the front. He normally holds 12 colored pencils inside, whose colors are, from left to right, white, lime, green, cyan, blue, purple, pink, red, yellow, beige, brown, and black. These are used as missiles. His dialogue is displayed with each symbol being semi-randomly picked from those colors, or, when severely damaged, a light gray.

By the time Mario has entered Overlook Tower, Colored Pencils has created drawings on the walls and floors, including one at the entrance displaying King Olly. As Mario scales the tower, Colored Pencils continually tries to stop him. First, the boss damages the elevator by piercing it with colored pencils, which, after being removed, cause the elevator to plunge back to the first floor. Second, when Mario reaches a cafe on the third floor, Colored Pencils retaliates by launching large salvos of pencils. The pencils also block the doorway out of the tower.

Once Mario reaches the red streamer's spool, he attempts to dislodge it by jumping into it, to no avail. Afterwards, two colored pencils are launched, forcing Olivia to shove Mario out of the way. The case then reveals himself, Mario pulling Olivia away when he is about to flatten her. Colored Pencils expresses detest of people erasing his work, introduces himself, and fights Mario.

After being defeated, Colored Pencils laments that Mario was better as a side-scroller, and explodes, erasing his drawings off screen and releasing a Magic Circle that Mario can use to destroy the spool.

In the first phase of the battle, Colored Pencils will launch four to six pencils prior to Mario lining up rings. The pencils signal their landing spot by placing targets over spaces on the board. The targets do not move when rings are rotated or slid. Merely walking over a targeted tile will cause Mario to be struck by a pencil for 3 damage, though it will not cancel his turn. After Mario finishes moving, any pencils that are still airborne will strike their targets. After Mario attacks, Colored Pencils will attempt to launch a Pencil Rain, launching his remaining pencils at Mario for 3 damage each, and then using Reloading, receiving 12 new pencils in time to launch and set more targets. However, if his lid is closed, which is achieved by Mario stopping behind the case and either using a strong enough Hammer attack or using the 1,000-Fold Arms to close the lid, the pencils will explode inside the case, dealing 3 damage each to Colored Pencils and stunning the boss, rendering himself unable to reload. The next turn, Mario can damage the open case by jumping, and Colored Pencils attacks him with Snap Shut, dealing 10-16 damage should Mario be in the inner two rings, then use Reloading again. If Mario closes the lid when the case is empty, Colored Pencils will taunt him before attacking him with Snap Shut.

At half HP or less, Colored Pencils will start using Rainbow Roll attacks, dealing 4 damage twelve times when able to, in bursts of three pencils, before Reloading. The technique also prevents Mario from closing the lid as he charges up during his turn. Instead, Mario can use the 1,000-Fold Arms in front of Colored Pencils and grab the pencils, then initiate a rush attack by slamming the case with them. If Colored Pencils still has HP left afterwards, the severely damaged case will be rendered permanently unable to reload, attacking with Worst Case for the rest of the battle, dealing 2 damage.