“Ho! What happened to me? For a reason I know not, I feel chilled...”
—Sprinbi, Super Paper Mario 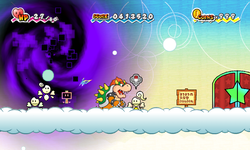 Sprinbi after being freed from her block of ice

Sprinbi is a minor character found in Super Paper Mario, a young Nimbi child who resides in The Overthere. Like most Nimbis, her name is a portmanteau of a month, day, or season and "Nimbi". In this case, her name is a combination of the season of spring and "Nimbi".

Sprinbi is found frozen in a block of ice after the Overvator is used, between another frozen Nimbi child, Monbi, and the Overthere Sector 3 door. Bowser may use his fire breath to free and speak to her. She appears to be confused as to what happened to her, seemingly being unaware she was even frozen.

In her tattle, Tippi refers to Sprinbi as a cute, though absentminded, Nimbi girl, claiming when she is told her head is in the clouds, she responds by saying "I'm not a Lakitu!", in reference to Lakitus always traveling in clouds.