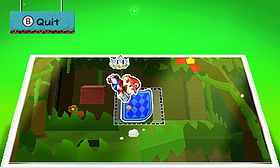 An area has just been paperized. Mario can then paste a Sticker from the album somewhere on the scene. In this case, Mario places a door to access a secret area.

“How's that? Mind blown? Yeah. Time's stopped, and the world's become as flat as a piece of paper. That's what I call "paperization"!”
—Kersti, Paper Mario: Sticker Star

Paperize (known as paperise in Europe and Australia and also called paperization or paperisation) is one of Kersti's abilities in Paper Mario: Sticker Star. The player has to press

to use it. At the start of the maneuver, Kersti projects a blue afterimage of a crown. Then she stops time and flattens the visible area on-screen, turning it into a picture. Mario and Kersti, however, float over the "picture", and Mario can choose stickers or scraps from his album to paste onto the scene. The item must be positioned, and after pasting it, Mario must smooth it out. He can then return to the newly altered scene. This ability is used extensively in the game to solve puzzles. Areas that can be affected by placing items show a faint box where a sticker can be placed or a purple void where a scrap is able to be placed, although the boxes only appear while the area is Paperized. Tree stumps with a red ring and pink flowers often indicate the presence of faint boxes in the area, although this is not a strict rule. If a faint box is not mostly but not completely on screen when Paperize is used, the screen may scroll slightly to get the box completely in frame. The same can happen for voids, but the game can scroll the screen more significantly if the void is only partially on the screen.

When placing a small sticker in a faint box with pink dotted lines, the box will turn into a fully visible ? Block. Hitting these blocks can yield either a completely different sticker or an upgraded sticker, making the paperize ability useful for getting better stickers or stickers that Mario does not have yet. With certain stickers, there is a chance to get a block that yields three stickers instead of one.

Mario can attempt to place stickers or scraps into locations without a void or a box, place a sticker into a box that is too small for it, or place a scrap into a void where it does not fit. In such instances the Paperization process will be canceled automatically and the scrap or sticker will be returned to Mario. If Mario places a Sticker into a box where the sticker would have no effect, the Paperization is completed but the sticker turns gray, peels off of the location, and is irretrievable.

The ability can also be used to remove or replace objects in the environment, like the fountain in Decalburg. When an area with a removable object is paperized, objects that can be removed have a peeling corner. Similarly to voids, the game can shift the screen to get these objects fully in frame. Mario can move to the peeling object and pull it out of the picture, and thus, the area. Objects that have been removed by Mario are saved in his sticker album as scraps, and a purple void is left where the object originally was. He can then paste the object where it originally was or into a different void with the same shape, although scraps that must be placed into a different area to progress are unable to be put back into their original location. Some objects rotate or flip over as they are placed in in the album, and this change can affect the object after it is returned to its place. After a scrap is placed where it belongs, the object is unable to be peeled off again.

Kamek and Bowser Jr. are capable of Paperizing as well, and use it to inconvenience Mario by removing objects that he needs to utilize to proceed. Oddly, when these characters Paperize, an afterimage of a blue crown also appears.

Mario can also use this power to retrieve Luigi from certain locations throughout the game, which is treated like other removable objects in the game except that Luigi does not peel and he runs off of the screen after being pulled out of the picture instead of being put into the album. He also does not leave a void behind.

While Mario is traversing the Warm Fuzzy Plains, he encounters Bowser Jr. To impede Mario's progress, Bowser Jr. turns a nearby bridge into a scrap and throws it onto a high ledge that Mario cannot reach. With no way forward, Mario is forced to turn back. After enlisting the help of a few Toads, Mario retrieves the bridge; however, he needs to find a way to put it back where it was. Kersti then appears, suggesting Mario use the paperize ability. Mario pastes the bridge back where it belongs, and continues on his way. This is the first time the ability is used.

As stated before, the ability is later used extensively in the game as a means to solve puzzles and uncover secrets. This ability could possibly be a form of breaking the fourth wall, as the area paperized is invariably the exact image seen on the Nintendo 3DS itself.

This ability cannot be used while Mario is separated from Kersti in Rustle Burrow and Rumble Volcano.