"Wind Waker" redirects here. For information about the microgame in WarioWare:Smooth Moves, see The Wind Waker.

“Toon Link's shield blocks lower down than Link's and Young Link's and can better cover his smaller body. However, he can't guard while moving faster than a walk.”
—Tips, Super Smash Bros. Ultimate

Toon Link is the incarnation of Link from The Legend of Zelda: The Wind Waker and The Legend of Zelda: Phantom Hourglass. In The Wind Waker, this version of Link goes on a quest to rescue his kidnapped sister, Aryll, and later becomes known as the "Hero of Winds" for his courageous efforts against the returning Ganondorf. In Phantom Hourglass, Toon Link is transported to a parallel world, where he seeks to rescue his friend Tetra from the curse inflicted upon her by the squid-like monster Bellum and return home with her.

While the art style associated with the "Toon" term was technically established during the development cycle of The Wind Waker[1] and was depicted in 2D artwork alongside The Legend of Zelda: Four Swords, the first usage of the term itself occurred in Super Smash Bros. Brawl to denote the Hero of Winds from The Wind Waker and Phantom Hourglass. However, the "Toon" term itself can nevertheless be used to describe the same art style, as Hyrule Warriors demonstrated in regard to the Princess Zelda from The Legend of Zelda: Spirit Tracks.[2]

Link was originally supposed to cameo in Mario & Luigi: Superstar Saga as one of the many Nintendo characters (all of whom were replaced by Professor E. Gadd in the final) who would appear at the Starbeans Cafe to test out Mario and Luigi's latest Bean Juice.[3] His sprite seems to have been modeled after the incarnation of Link as he appears in The Legend of Zelda: The Minish Cap.[4] Meeting Link would award the player the Triforce, which was replaced with the Great Force for the final version.

In WarioWare: Smooth Moves, there is a microgame called The Wind Waker which involves Link using his Deku Leaf to land on an island. This game uses the form "The Mohawk".

The microgame The Wind Waker returns with Toon Link in WarioWare Gold, alongside a new microgame called Phantom Hourglass, in which the player must draw a path for Toon Link's Boomerang to hit Shock Switches. 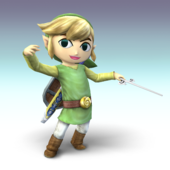 In Super Smash Bros. Brawl, Toon Link is a secret playable character. He can be unlocked by either finding a door in The Forest in The Subspace Emissary after beating the mode, playing Classic after clearing The Subspace Emissary, or by playing 400 Brawl matches, then defeating him in battle. His attributes and moveset are mostly similar to Young Link from Super Smash Bros. Melee, in that he is lighter than Link, but also faster than him. Toon Link's only unique attacks are his up smash, forward and back throws, and standard, forward, and back aerials.

Toon Link's special moves are mostly the same as Link's, though Toon Link's attacks use their The Wind Waker variants. The only different move is the Boomerang, which is the same as Link's Boomerang in Super Smash Bros. Melee. Toon Link's grab also uses the Hookshot from The Wind Waker, which like Link's Clawshot also has a ledge-homing property, though its range is not as far. They also share a Final Smash, Triforce Slash. Despite this, some of their other moves are different, and some of their shared moves have different properties, such as Toon Link's Hero's Bow having an arc to the arrows.

After beating The Subspace Emissary, in The Forest stage, if the player enters the first red door in the beginning of the level, they will be taken to the Pirate Ship. There, Toon Link will be looking out to the sea. However, once he sees the player, he's surprised. Thinking the player is an enemy, he attacks the player. The player then fights Toon Link, and if he is beaten, Toon Link is unlocked as a playable character. 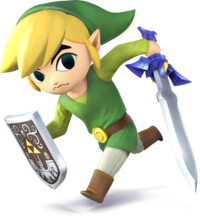 Toon Link returns as a starter playable character in Super Smash Bros. for Nintendo 3DS and Super Smash Bros. for Wii U. His moveset remains unchanged from Super Smash Bros. Brawl, though with the game's new art style his design has been updated to more closely resemble his actual appearance in The Legend of Zelda: The Wind Waker. Toon Link is faster than before, but in exchange, his damage output is lower.

One of Toon Link's additional alternate costumes in this game is based upon the appearance of the Link from The Legend of Zelda: A Link Between Worlds. Additionally, the Toon Link from The Legend of Zelda: Spirit Tracks (also known as "Engineer Link") appears as a background character, complete with his Engineer's Clothes to further differentiate him. Engineer Link appears on the Spirit Train stage in the Nintendo 3DS version, where he conducts the titular train. However, he is replaced by his mentor Alfonzo if Toon Link or Link are involved in the battle.

Toon Link returns as an unlockable playable fighter in Super Smash Bros. Ultimate. He is now further differentiated from Link than in previous games, due to the latter now being the "Hero of the Wild" from The Legend of Zelda: Breath of the Wild. However, Toon Link now shares more similarities with the returning Young Link. Toon Link's moveset is largely unchanged, though his forward smash is now a single upward slash instead of two slashes with his Master Sword.

Toon Link benefits from universal changes, such as having much faster mobility, lower landing lag for his aerials, reduced short hop timing, an extended recovery because of the reintroduction of directional air dodges, and the ability to use any ground attack out of a dash and use his aerials on ladders. However, his overall damage output is decreased even further.

Engineer Link also reappears as a background character on the Spirit Train stage. In comparison to the previous installment, he appears virtually identical to the playable Toon Link (save for his Engineer's Clothes), instead of using a polygonal model similar to his appearance in Spirit Tracks. As with the other The Legend of Zelda characters, Toon Link's victory theme is now a different arrangement of the main theme of the series.

Throughout the route, the player is assisted by a red and blue Toon Link, in reference to The Legend of Zelda: Tri Force Heroes. If the player is playing as one of those Toon Links, that respective Toon Link is replaced by the default green Toon Link. 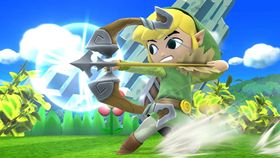 Toon Link using the Hero's Bow in Super Smash Bros. for Wii U

The Hero's Bow is Toon Link's standard special move, shared with Link and based upon the recurring Bow item throughout The Legend of Zelda series. Toon Link's Bow is designed after the Hero's Bow from The Legend of Zelda: The Wind Waker. When used, Toon Link fires an arrow from the bow which damages any opponent it hits. The player can charge the attack to increase the distance the arrow travels and its damage output by holding down the special attack button. Unlike Link, Toon Link fires his arrows at a higher angle, although his arrows do not travel as far and do not deal as much damage. 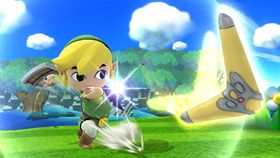 Toon Link's Boomerang in Super Smash Bros. for Wii U

In Super Smash Bros. for Nintendo 3DS and Super Smash Bros. for Wii U, the Boomerang's first custom variant is the Floating Boomerang, which makes the Boomerang move more slowly as it returns. The second is the High-Speed Boomerang, which throws a faster boomerang than normal that can pass through opponents, but it is weaker than normal and does not home in on Toon Link when returning. In addition, one of the custom special moves for Link's Gale Boomerang is called "Boomerang", which gives it a similar effect to this move. 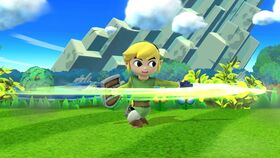 The Spin Attack is Toon Link's up special move, shared with Link and Young Link. The move is based on the Spin Attack move recurring throughout The Legend of Zelda series. When used, Toon Link spins around rapidly with his sword to deal damage. When used in the air, the move also gives the character some vertical and horizontal distance. When used on the ground, the move can be charged by holding down the special attack button. Unlike Link's Spin Attack, both Young Link and Toon Link's versions of the move can draw in opponents and deal multiple hits (although Young Link's has less range).

In Super Smash Bros. for Nintendo 3DS and Super Smash Bros. for Wii U, the Spin Attack's first custom variant is the Sliding Spin Attack, which gives the move a longer charging time, but it deals more damage, as well as allowing Toon Link to move across the ground, and giving the move more horizontal distance in the air. It offers less vertical distance as a drawback, however. The second variant is the Flying Spin Attack, which causes the move to end with a vertical slash that sends both Toon Link and the opponent into the air, also increasing the move's vertical distance. 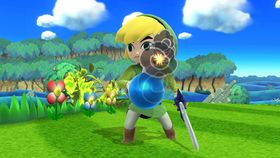 Toon Link with a Bomb in Super Smash Bros. for Wii U

The Bomb is Toon Link's down special move, shared with Link and Young Link. It is based on the item recurring throughout The Legend of Zelda series, although Toon Link's in particular are based on the ones from The Legend of Zelda: The Wind Waker, even using the more cartoon-styled explosion. When used, Toon Link pulls out a Bomb that can then be thrown at other characters to do damage, exploding on impact. Like other explosives, the Bombs also deal damage to the holder; it can also be caught and thrown by opponents, or detonate in the player's hands. Compared with Link and Young Link's Bombs, Toon Link's Bombs have a larger blast radius. The player cannot use the move while holding another item, as the bombs count as an item.

In Super Smash Bros. for Nintendo 3DS and Super Smash Bros. for Wii U, the first of the Bomb's custom variants is the Time Bomb, which does not detonate on impact, deal as much damage, nor fly as far when thrown, but increases the explosion's knockback. The second variant is the Short-Fuse Bomb, which explodes more quickly but deals more damage, has a larger blast radius, and launches opponents up. 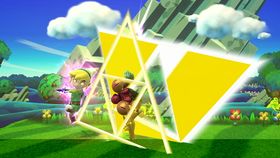 Triforce Slash is Toon Link's Final Smash. When activated, Toon Link's Triforce on his hand glows and he fires a beam of light directly in front of him. If an opponent is in the line of fire, they are trapped between two Triforces as Toon Link rushes forward to deliver several sword blows. After fifteen slashes, Toon Link rushes through the trapped opponent, launching them. While the Triforces can only trap one opponent, other nearby opponents can take damage by coming into contact with the sword slashes or the Triforces themselves. If the beam of light does not reach an opponent, the attack fails.

Toon Link appears as two Mystery Mushroom costumes in Super Mario Maker: one based on his appearance in The Legend of Zelda: The Wind Waker, and one (named Totem Link) based on the trio of protagonists in The Legend of Zelda: Tri Force Heroes. The former costume can be unlocked by scanning the Toon Link Amiibo or randomly after completing the 100 Mario Challenge on Normal difficulty, while the latter costume is unlocked after completing the "Tri Force Heroes" Event Course.