Super Mario in Die Nacht des Grauens (referred to as simply Die Nacht des Grauens in the second part, English translation: Super Mario in The Night of Horror) is the name of a 12-page comic in two parts, the first one being published in the 5/1996 issue of the German Club Nintendo magazine. The story was not continued until one year later, when the second part was published in issue 5/1997. It is the only comic in the magazine to be continued after such a long break. 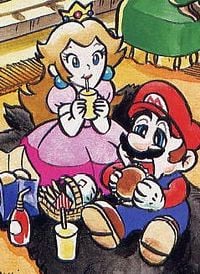 Toadstool and Mario enjoying their meal, shortly before the lightning strikes.

It is Halloween and shortly before midnight, and a heavy storm is coming over New York City. Mario and Princess Toadstool, who live in a huge skyscraper in the heart of Brooklyn together with various other Nintendo characters, are enjoying the comfortable atmosphere and their midnight dinner. They are just about to kiss, when suddenly a bolt of lightning strikes and puts the building into complete darkness.

Mario lights a candle and decides to go down to the cellar, in order to check the fuses. Toadstool is uneasy about letting Mario go down alone, but stays in the room as she is even more afraid of going to the cellar herself. When opening the door to the room with the fuse box, he meets Kirby and Link, who also have apartments in the skyscraper and went down to check the fuses. Suddenly, they hear some strange whispering, coming out of Wario's room. Link, who obviously is afraid of doing it himself, asks Mario to carefully open the door and check what is going on. When doing so, Mario does not believe his eyes. Wario's room is full of monsters and other characters from horror films and stories, such as Jason Voorhees, Chuckie, and Leatherface.

In the middle, Wario and Abigor, a demonic creature, are sitting at a table, debating. Abigor's plan is to take the skyscraper over, in order to have enough rooms for all his diabolical fellows. He asks Wario, who is the caretaker of the apartment building, to give him the keys. Wario likes the plan but asks what he is getting out of the deal. Abigor replies that he is able to manipulate Toadstool's brain. She would ignore Mario and instead fall in love with Wario. Zealously, he immediately signs the contract and hands the keys over to Abigor. In this moment, all the monsters stream out of Wario's room to search their new apartments matching their keys. 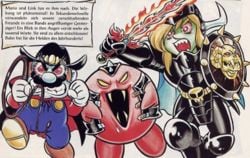 After Mario and Link have seen this, they don't know what to do; especially Mario, who is desperate because of Toadstool still being alone in their apartment. Kirby, however, stumbles across a chest which reads "Van Helsing", the name of the man who defeated Count Dracula. The three friends open the chest and find a number of weapons inside, such as a rapier and a crossbow. There are also clothing and some test tubes inside. Soon they realize that they can use all these items to defeat the monsters, and try out the clothing and the weapons. Kirby also tries the red serum in the test tube, followed by Mario and Link, and immediately their appearance changes and they turn into aggressive ghostbusters with special weapons and abilities: Mario gets a whip, Link a firesword, and Kirby the ability to inhale his enemies and to burn them with his fire breath.

In the meantime, Chuckie has found "his" apartment, which actually belongs to the Kongs. Donkey and Diddy are watching TV, when Chuckie bursts in, preparing to attack. However, in this moment, Mario, Link, and Kirby open the door and attack all the monsters coming in their way by using their special abilities. After a short time already, the monsters flee the fight, and even Abigor has disappeared.

After saying good-bye to Donkey and Diddy Kong, Mario and his friends contentedly doff their clothing and weapons and put them away into the chest again. Link thinks they might need them again, but Mario believes it is best to put the chest into a dark corner of the cellar so nobody would find it. After this is done, Kirby realizes that he is tired, and the friends decide to go to their apartments and to bed. Mario opens the door to his apartment, expecting to find Toadstool sleeping. However, she still sits in her armchair. Mario, who only sees her back, talks to her, but she doesn't reply. When he finally sees her face, he finds that she has turned into a zombie, with a wan face and cavernous eye-holes. 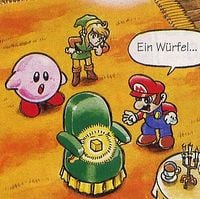 Mario and his friends expect to find Peach, but there is only a golden die.

Kirby and Link are in their room, watching TV and eating pizza. Suddenly someone knocks at the door, and Kirby wonders whether he should open it. When doing it, Mario comes storming in, squashing Kirby with the door. While Link pumps his friend up with an air-pump, Mario reports what has happened to Princess Peach.

Immediately they head to Mario's room. Where Peach has been sitting, however, all that's left is a glowing golden die (presumably Lemarchand's box which was featured in the movie Hellraiser). Mario notices that it can be opened and recomposed. He tries it out, and immediately Link and Kirby claim to suffer from sickness. After a short time, they feel normal again, expecting something in their environment has changed, but they cannot find anything. Mario suggests to scan every room in order to find Peach. Kirby enters the bathroom and walks to the toilet, in order to wash his hands. The toilet, however, sucks him in. The same happens to Mario and Link with an icebox and a TV, respectively. They all get into a swirl which finally takes them to an underground crypt.

There are graves throughout the vault, and Kirby notices that one of them has a skeletal hand sticking out and holding a book. Mario grabs it and thumbs through, assuming it to be a grimoire. Finally he tries to pronounce one of the spells, with the effect that he and his friends find themselves rouged and in outmoded women's clothes. Mario tries out another spell, which has the effect that a gate opens. The friends pass it and come into a dark corridor, which turns out to be the Elm Street Tunnel. At the end of it, they stumble upon Chuckie and one of his demonic allies, who ask them what they want. Mario, trying to make use of their outfit, claims that they are the cleaning squad and have come to tidy up Abigor's room. The monsters, however, don't fall for this trick and kick Mario, Link, and Kirby into the next room, which they refer to as Infernum, Abigor's temple. 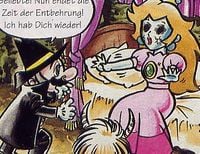 They find themselves in a large room with a pentacle on the ground, surrounded by the monsters they fought against earlier and facing Abigor himself. The demon correctly assumes that they have come to rescue Peach, and sets his allies on Mario, Kirby, and Link. While Link is attacked by some monsters, Mario manages to thumb through his grimoire again, looking for a suitable spell. Soon he finds what he was searching for, the "Dark Hero Horror" spell. Immediately after pronouncing it, the three friends turn into angry, powerful, dark creatures.

They use all their powers to fight the monsters, and finally manage to drive them back. Abigor claims to strike back sometime, but after that they disappear. Mario opens the door to where Peach is being held captive, and finds her, still in her zombie form, sitting on a bed. Mario wants to hug her, but all that she replies is a nonsensical sentence ("Your mother scrubs toilets in hell", which is a reference to a similar line from The Exorcist). The plumber, however, claims that their love is stronger than the spell, and finally she turns back again.

Link finds that the only thing they are lacking now is a spell to get back to their normal world. Mario tries one out, and after being sucked into a light beam, they pop amidst a public event. It turns out to be the "Musikantenstadl", which Mario declares for being worse than hell, while Link and Kirby are enjoying the party.